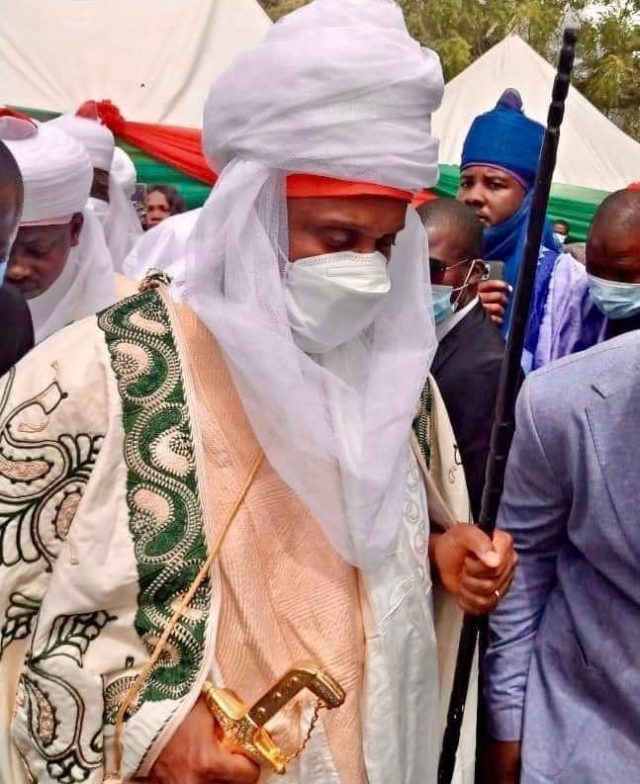 By late evening of Saturday, February 5, 2021, the hundreds of thousands of people milling around barricades and walls outside the humongous palace of the Emir of Daura’s Palace, in Daura, Katsina State, have started to grow restive.

All day, they had waited fervently in the scorching and punishing Savannah sun. Yet, they were not deterred. They patiently waited for the man behind their visit.

“How long will he keep us waiting?” Several in the huge crowd asked rhetorically without expecting an answer.

Finally, the gatekeepers signaled. The moment has come. The much expected August Visitor is in town for a glorious welcome.

The centre of the wild ecstasy, Minister of Transportation, Rt. Hon. Rotimi Amaechi, who had arrived the palace in a convoy of 53 vehicles was forced to alight from his vehicle to trek the over 100 metres left to the pavilion amidst cheers from the legion of supporters who sang his praises to high heavens.

An elated supporter who had left his Fegi Sabongari residence several miles away around 9.00am on Saturday for the turbaning ceremony which did not start until late in the evening so that he could be among the first in line, bolted towards the palace gate, hoping to gain access inside.

“It is not enough to be in the pavilion, said Danladi Baba, 38. The visibly elated Baba could not be faulted for his exuberance. Their ‘son’ had come home for recognition and he needed to be as close as possible to the stage.

Behind him, as far as the eye could see, the crowd surged toward the massive gate. They were, however, disappointed as most of them could not gain entrance into the venue as much as they tried.

The near chaos did not stop the turbaning rites from going ahead. In line with tradition, Amaechi was led to where the Emir, Umar—Faruk Umar, sat with invited guests to pay homage.

After paying homage to the monarch, he was immediately taken to a decorated podium already set up for his turbaning as Dan Amanar Daura (Trusted son of Daura) which was performed by two senior kingmakers and district heads; Galadiman Daura and Kauran Daura, on behalf of the emir.

After the rites, Amaechi was again led by the two kingmakers to the emir to pay homage and accept the title.

The visibly happy Emir of Daura, Umar — Faruk Umar, while giving reasons for the honour bestowed on the former Rivers State governor, said he appointed him as Dan Amanar Daura because of his dedication to the development of Daura Emirate.

We are Muslims and our religion allows us to respect those who respect us. If I turban anyone, it is not because he gave us money or we want something from that person, we turban people irrespective of their religion or tribe.

“You are living witnesses that we have turbaned a lot of people in this country and even beyond. You know that we dont do what we do for monetary gain.

I would like to remind you that the good things the minister brought to this emirate are countless but we have seen the University of Transport Technology that he has sited here, we have seen the railway that has been sited here to Niger Republic. Because of that rail line, we will have a station here were our peoples business will progress.

“I dont give people tittles because of money no matter how rich you are. Its a tradition here to reward those who have shown great love and commitment to our people, the emir said.

A horse was brought for the turbaned minister of transportation to mount after which he was led into the palace by the guards to take up his position as an adopted son of the ancient Hausa town.

Amaechi’s turbaning as the Dan Amanar Daura, the hometown of President Muhammadu Buhari, did not come to political pundits as surprise. In fact, they argued that the public show of support is the confirmation of Amaechi’s position as a “true son of the establishment” who is destined for greater things to come.

According to them, Amaechi’s turbaning has changed the dynamics of things as the 2023 presidential election approaches.

The consensus is that the North is not known for frivolities as every action its leaders take has its significance.

The Publisher of The Niche, Ikechukwu Amaechi, noted that in a country where mistrust is a thriving industry, the huge recognition for the minister is a big deal.

“Coming in this political silly season, it is one turbaning ceremony that is bound to reverberate in the days, weeks and months to come.

“I am particularly awed by the title, Dan Amanar. So, Amaechi is being honoured as a trusted son of Daura even as he remains a proud Ikwerre man from Rivers State.

“In this cynical era of heightened ethnic irredentism and distrust, fueled principally by Buharis exclusionist politics, it is ironic and at the same time fascinating that an Igbo from the Niger Delta has been adopted not only as a son by the Daura Emirate but also adjudged trustworthy.

“If Amaechi has been adopted as a trusted son, it then means that the people of Daura have faith in him — his reliability and uncanny loyalty to friendship”, declared the Niche publisher.

BH reliably gathered that Ameachi is very close to the president owing to his closeness and faithfulness to him.

According to some sources in the presidency who spoke with our correspondent, the president is not averse to him (Amaechi) succeeding him.

“Despite the flurry of attacks and opposition from his people from the southern part of the country, the minister ensured that a university is built in Daura. This is apart from the railway line that is being built from Daura to Maradi in Niger Republic.

“He has proven to be a friend, or what I will call a true son of the North. His presidential ambition, if he has any, is going to be helped by his being an Igbo from the South South region.

“It is like using a stone to kill two birds. Being an Igbo from Ikwere land, and at the same time a Rivers man from the Niger Delta is a plus for him.

“I think he is the only joker the president can deploy to stop the surge by Tinubu. If he (Amaechi) can get the support of his Igbo tribe and the support of his South South region, in addition to a strong support from the North, nothing can stop him from becoming the president come 2023. Not even Tinubu”, declared Alhaji Hassan Mohammed Sheriff, a chieftain of the APC in Bauchi State.

Another political analyst who spoke on the development said Saturday’s turbaning is a tacit support and endorsement of Amaechi’s candidacy as the North’s preferred candidate from the South for president come 2023.

“Most likely the candidate of the All Progressives Congress (APC). The man after Buhari’s heart. The president prefers him to Tinubu by far. He will also be acceptable to both the Southeast and South South”, said a political analyst.

A senior editor in a national newspaper told BH that the public display of affection for Amaechi has pointed to Buhari’s allusion to his preferred candidate being a dark horse.

“But how would the South West respond, and also Southeast if an Igbo is on the ballot? This game is in the hand of Peoples Democratic Party (PDP). The convention will make things clear”, the veteran journalist stated.