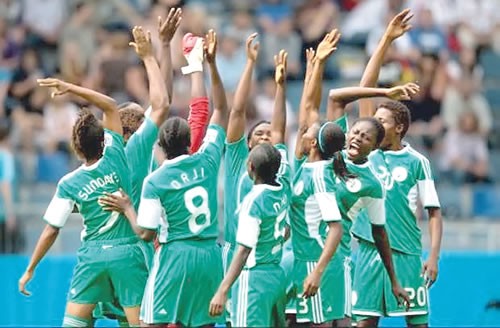 NIGERIA has been drawn bye in the African preliminary round of qualifiers for the 2016 FIFA U-17 and U-20 Women’s World Cup finals.

By the fixtures released by the Confederation of African Football (CAF), the Nigerian U-17 and U-20 female teams will not be part of the preliminary round.

The two-legged fixtures in the U-20 at this stage will be decided in May this year while the U-17 fixtures will be held between November and December.

Of the countries likely to face Nigeria in subsequent rounds, South Africa remains the toughest side and one of the recurring opponents in the two competitions.

In the first round of the African qualifiers where Nigeria will begin its quest, the Falconets, runners-up at the last World Cup in Canada, will meet the winner between Sierra-Leone and Liberia. The two-legged fixture will be decided between July 10 and 26.

If they qualify for the second round, the Falconets will square up to the winner between Congo DR/Gabon and Namibia. The two-legged fixture will be decided between September 25 and October 11.

The qualifiers end at the third round and if they scale through, Nigeria will face the winner between Tanzania/Zambia versus South Africa/Botswana. That will be between October 23 and November 8.

In the first round of African U-17 qualifiers, the Flamingoes, quarter-finalists at the 2014 FIFA Women’s World Cup in Costa Rica, will meet the winner between Botswana and Namibia in the first round fixtures to be played between January 8 and 24, 2016.

The qualifiers end at the second round and if the Flamingoes go through to this stage, they will face the winner between South Africa and Zambia in the two-legged fixtures to be decided between March 11 and 27, 2016.