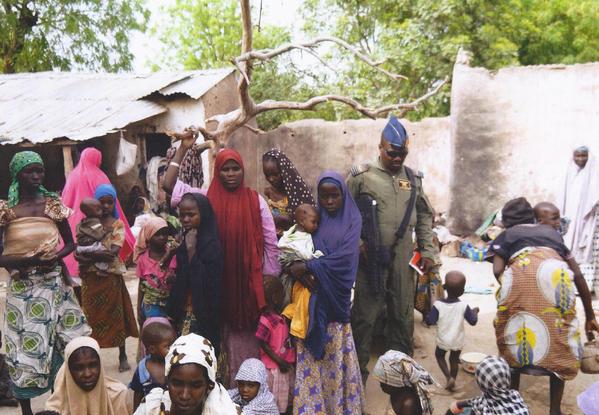 Since the disclosure by the United Nations Population Fund (UNFPA), that about 214 women and girls rescued from the Sambisa Forest are at various stages of pregnancy, the much expected Federal Government welfare package to begin their rehabilitation process is yet to be delivered, Daily Independent can authoritatively reveal.

Our Correspondent who has been monitoring development at the Yola centre, Adamawa State, where some of the women and girls are being taken care of, learnt that there are now about 1000 survivors who are in urgent need of medical attention which is not forth-coming as expected.

It was gathered that since most of the survivors were rescued by the Nigerian Army and being attended to in camps, aside the initial screening exercise carried out to evaluate their health status by volunteer aid workers supported by the UNFPA, government healthcare providers are yet to begin any other procedure on them.

Our Correspondent reliably learnt that the National Emergency Management Agency (NEMA) which is at the forefront of coordinating activities at the centre, “is presently overwhelmed by the number of survivors that are being rescued daily by the Army and are finding it greatly a challenge coping with their needs”.

As at Wednesday evening, Daily Independent learnt that a series of meetings held among partners of the Federal Government were yet to reach any formidable agreement on what modality to adopt in coordinating the medical needs of the survivors, just as there were disagreements on how to mobilize.

Meanwhile, the Defence Headquarters, on Wednesday said it has destroyed another seven terrorists camps, rescuing 25 more women and children from the forest.

According to an evening tweet by Defence Headquarter’s spokesman, General Chris Olukolade, victims who were under “ISWA bondage (were) freed as our troups continued the onslaught on Sambisa Forest.

“Troops scaled series of land mines as assault on forest bases of the terrorists continues, captured camps include the four notorious Alafa Camps, Rogo Fulani, Laraga and other terrorist training camps, weapons and vehicles were destroyed by our troops.”

In the process, he said, four soldiers were wounded and evacuated for treatment, but that the troops were in high spirits and morale, combing forests for terrorists, arms and hostages.

Also at the midweek, House of Representatives canvassed a special fund to assist the devastated states of Adamawa, Borno and Yobe, while mandating its committee on management and disaster to liaise with NEMA to ensure a comprehensive rehabilitation of all victims of insurgency in the North-East zone.

In a motion, Friday Itulah, noted that the recently rescued victims have been abused and traumatized, hence the urgent need to provide special funds to assist them.

The lawmaker observed that though NEMA is trying hard to rehabilitate the victims, it is necessary that the house makes input to ensure their speedy recovery.

Itulah expressed belief that the international community should not be more interested in the issue than Nigerians.

Contributing, House Minority Leader, Femi Gbajabiamila, observed that unless something is done urgently to assist the returnees, “beyond the physical injury that these victims may have suffered, they may not be able to heal emotionally if something is not done”.

Gbajabiamila also called for a special bill to help victims of any form of insurgency.

Deputy leader of the House, Leo Ogor, also pleaded that everything should be done for the proper rehabilitation of the victims, including special monitoring of their well-being.

A source further told Daily Independent: “This noticeable shortcoming we are witnessing is as a result of the fact that there was no concrete preparation on the side of the Ministry of Health to coordinate all the partners most of whom are non-governmental and volunteers on how best to meet with the medical demands of the victims once they are released from captivity.

“Government never anticipated the magnitude of the problems that it is now being faced with and so despite the much taunted preparedness by the government, it is disheartening to discover that the efforts by the partners of bring back our girls which is now needed in the area of human support is not readily available as the ministry of health has not been forthcoming with the much needed leadership to direct the affairs of the partners in assisting the victims,” the source lamented.