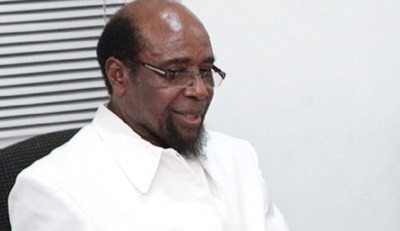 It was a day of glowing tributes at Ngodo, Isiochi in Umunneochi local government of Abia state as the late Senator Uche Chukwumerije was laid to rest. ORI MARTINS reports

The sleepy town of Ngodo, Isiochi in Umunneochi Local Government Area of Abia State came alive with activities last Friday as top government officials, celebrities and other important personalities gathered in the community to pay their last respects to the late Senator Uche Chukwumerije, who died in a German hospital a couple of weeks ago. The last journey to Ngodo actually started at the Akanu Ibiam International Airport where Chukwumerije’s immediate family members and scores of prominent Igbo and indeed some other well meaning Nigerians had gone to receive the late lawmaker’s corpse.

Chukwumerije was buried amidst eulogies as his body arrived at his home town at about at about 3pm from Enugu. As a mark of respect to his sense of colour while he was alive, his family members were clad in immaculate white attire just as most guests maintained a high degree of solemnity as the pall bearers quietly gyrated for the funeral services at Wesley Methodist Church, Isuochi, in Umunneochi.

In his sermon, taken from Hebrews Chapter 9, verse 27 to 28 and entitled “Judgment”, the Prelate of the Methodist Church of Nigeria, His Eminence Sam Uche, admonished Christians and indeed all human beings irrespective of their religion or tribe, to be aware that there will be judgment at the end of man’s sojourn on earth. He noted that man must certainly account for all his actions and inactions on the Last Day. “Life on earth is ephemeral, it is transient,” he said, urging Nigerians to understand that “every office we occupy has a terminal date.” He described Chukwumwerije as a man who worked for what he believed in even as he was a hard working professional who believed in merit, honesty and discipline.

In his tribute, Mark paid glowing tribute to Chukwumerije, describing him as an honest, transparent and excellent parliamentarian who contributed to the growth and development of Nigeria’s democracy through his quality debate and presentation in the Senate. He stated that the late senator was a man who loved his Igbo tribe and was at the same time a believer in the Nigerian state. The Senate President observed that Chukwumereije was a true democrat and a patriotic Nigerian. He equally described him as courageous, eloquent and frank on national issues, insisting that it would be difficult to find a replacement for him. The Senate President said that it was difficult for him and other senators and all those who were very close to the senator who represented Abia North to believe that he was dead and gone forever.

He lamented that Chukwumerije would no longer be seen again as far as the planet earth was concerned. He philosophically added that: “To me, I do not think that Chukwumerije is dead. I think he has gone to sleep and will rise to sleep no more. We the senators and other Nigerians who appreciated his statesmanship and nationalism would eternally miss him. Let me quickly add that no fewer than 85 senators, who attended Wednesday’s sitting devoted to him, wanted to speak in his honour. This is a mark that he was truly a good Nigerian in the real sense of it”.

In a chat, the former APGA national chairman, Chief Victor Umeh described Chukwumerije as a dogged fighter who clearly identified with the masses and stoutly defended their interests even at the risk of his own personal life. He called him Odumegwu Ojukwu in another form and regretted that his death had robbed the Igbo nation, a man who might not be replaced, at least for now. Speaking in the same line of tribute, Deputy Senate President, Ike Ekweremadu advised the Igbo nation and Nigeria at large not to allow the noble causes which the late senator was known for to die with him.

He described Chukwumerije as a man of impeccable character who was almost flawless in his dispositions as a lawmaker. Ohaneze President, Chief Gari Enwo-Ighariwe was full of praises for the man who hailed from Umunneochi LGA, describing him as one who in all intents and purposes symbolized the industry and ingenuity of the Igbo man. He said Chukwumerije was a visionary Igbo man and a selfless Nigerian whose contributions to regional integration as well as national development were quite commendable. He prayed to God to grant his family members, the Igbo nation and Nigeria at large the fortitude to bear the great loss.

What almost dented the funeral services was the conspicuous absence of the Abia State Government but it was later revealed that Chukwumerije family kept the state at abeyance hence it could do much or participate actively during the burial.

Other high ranking government officials that attended the burial included Governor Willie Obiano of Anambra State, his Imo State counterpart Rochas Okorocha, the former Vice President Alex Ekwueme and his wife. Others were the Minister of Finance, Dr Ngozi Okonjo-Iweala; the Deputy Senate President, Ike Ekweremadu; the Senate Leader, Ndoma Egba; the Deputy Speaker of the House of Representatives, Emeka Ihedioha; and a member of the House, Lawan Farouk. Also present were Senators Enyinnaya Abaribe, Nkechi Nworgu and Chris Ngige, and the governorship candidate of APGA in Abia, Dr Alex Otti. The President-General of Ohaneze Ndigbo, Chief Garri Enwo-Ighariwe, led other chieftains of the apex Igbo socio-cultural group to the funeral.

Chukwumereije who was born in 1939 died on April 19, 2015. He was first elected a Senator of the Federal Republic of Nigeria in April 2003, on the platform of PDP when he replaced Gen. Ike Nwachukwu, who had decided to contest for the presidency of the country. He represented Abia North Senatorial Zone. Chukwumerije served as Minister of Information in the regime of retired General Ibrahim Babangida and under the Interim National Government of Chief Ernest Shonekan. Though a PDP member, he fell out of favor with the party’s leadership when he opposed President Olusegun Obasanjo’s Third Term plot. He eventually decamped to the Progressive Peoples Alliance in 2006, and was reelected to the Senate on April 28, 2007.

He easily won a reelection on the PDP platform in the April 2011 elections. He died in office of lung cancer in 2015 after he failed to win a PDP senatorial primary in December 2014. He is mostly remembered for his propaganda role during the Civil War; his harsh stand against June 12, 1993 apostles as the Minister of Information; his fight for the release of MASSOB leader Ralph Uwazurike and his activities during the Ojukwu burial rites where he served as a Deputy Chairman of the Burial Committee. Chukwumerije had children, and one of his sons Chika, won a bronze medal at the 2008 Olympic Games in Beijing. Another son, Dikeogu Egwuatu Chukwumerije, is a writer and a performance poet.