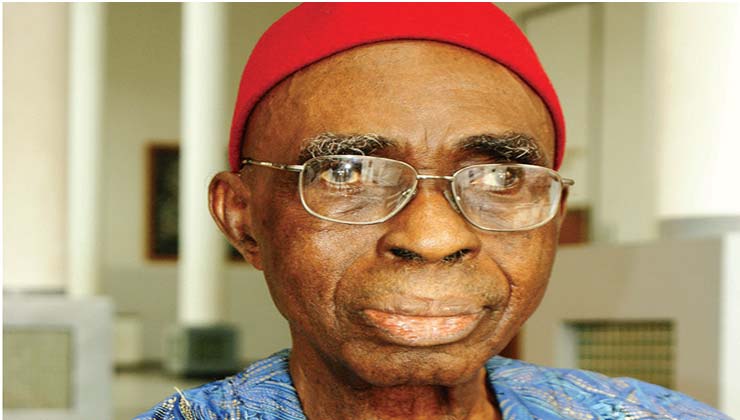 “Gray hair is a crown of glory; it is obtained by following the righteous part.” Proverbs16:31

Bob Ogbuagu today does not necessarily have plenty of gray hair, but obviously the gray hair referred to in the above bible passage does not imply strictly hair that is gray but certainly a head that has seen a lot of years and that’s where he belongs.

It is yet another milestone, another 25th day of May; the day Chief Bob Beremako Ogbuagu added another year to his illustrious days on earth; the day he became a nonagenarian! And, of course, the above passage from the bible tells why he is waxing strong even at age 90.

Bob Ogbuagu is certainly not an ordinary man; but he is not extraordinary simply because he is 90 today, for one couldn’t say there haven’t been other people who have attained the age in our time or even gone beyond it, no matter how few their number might be. Bob is however a special breed; he is not just 90, he is a hero at 90.

In a sense nonetheless, one must admit that attaining the age 90 is a huge achievement on its own, and there is even more to it, Ogbuagu is still active and reasonably young at his age. For those who share the belief that age is just a number, Ogbuagu is a certain validation for that belief. And to those who hold a view to the contrary, he has given a good reason to ponder. Would one be wrong in thinking that the legendary writer, Mark Twain had this equally great achiever in mind when he posited that age is an issue of mind and matter and that if one didn’t mind age, it wouldn’t matter? Obviously, with Bob in mind, Twain is right.

But let’s not dwell basically on the fact that he is 90 on this day, lest we pay less attention to his numerous achievements, which is what makes this day worthwhile for Bob and his numerous admirers and benefactors. While one may not be entirely wrong in arguing that long life and prosperity comes through God’s favour, swallowing that argument holistically could reasonably imply resorting to the lazy mindset of “God had chosen those He wants to bless,” which is obviously the simplest way to denigrate hard work and dedication as it relates to success. At least, one would agree, to a large extent, with Coco Chanel who noted, “Nature gives you the face you have at twenty; it is up to you to merit the face you have at fifty.” The sense here is that nature offers everyone an opportunity; it then depends on what one makes of it.

Bob Ogbuagu is in every sense, a man who made good his opportunities and like the symbolic good servant in the bible whose master had given five talents while embarking on a trip and who had worked with dedication to double them much to the gladness of his master who muttered these words on his return; ‘Well done, good and faithful servant. You have been faithful over a little; I will set you over much. Enter into the joy of your master.’ (Mathew 25: 21), he should now look forward to a warm reception by Master Jesus at the end of time.

Born on Sunday May 25, 1925 at the town of Umuagbom Umukabia Okaiuga, Alaike autonomous community of Ohuhu clan in Umuahia North Local Government Area of Abia State Nigeria to the family of Chief Francis Udegbu Ogbuagu, a Methodist Church school teacher who retired as a headmaster, and Madam Janet Nwannediya Ogbuagu, Bob Ogbuagu whose name by, the way literally translates to ‘the lion killer’ went on to become one of Nigeria’s foremost nationalists, philanthropists and activists.

Though not rated in the same grade as Dr. Nnamdi Azikiwe, Obafemi Awolowo, Ahmadu Bello, Anthony Enahoro, Herbert Macaulay and many others in contemporary Nigerian history, for obviously he was still a budding nationalist when those great men held sway in the anti-colonial struggle, Bob nonetheless punched beyond his weight in the struggle for Nigeria’s self determination as a young lad under the tutelage of Zik. But his is what could be described as an unsung hero.

Bob Ogbuagu was one of the few who pursued western education at a time when most parents in Igbo land, and indeed the entire continent of Africa preferred that their male children grow to become successful farmers; grow yams, have several barns, get a wife and become a man; a time when western education was alien to African tradition. It was only the ‘unwanted’ that were allowed to go to school, or as it were, ‘follow the white man in his wayward life.’ But Ogbuagu was not held down by that prevailing practice; his father having embraced western education early enough himself.

The sage had his early education at the famous Methodist College Uzuakoli, but it was not long before his strong academic prowess paved way for him to attain higher education having excelled in Senior Cambridge School Certificate Examination with distinction.

And having achieved more than a reasonable level of education, Bob was ushered into the world of the civil service when he got a job at the Nigerian Secretariat Kaduna in 1946 as a Third Class Clerk, but as a young man destined for greater things, he soon got fed up with life as a clerk and left for the Geological Survey Department in the same Kaduna where he became a Geological Assistant.

Like many young, bright Nigerians at the time however, Bob despite being reasonably well to do as a civil servant was beginning to get disillusioned with the British colonial overlord’s oppressive rule and saw a good cause to join the independence struggle. This he did through the famous Zikist Movement, a radical political group founded in 1946 by budding, enthusiastic Nigerian nationalists such as Nduka Eze, Kola Balogun, M.C.K Ajuluchukwu, M. Aina, Abiodun Aloba, J Inoma among others with a view to defending Dr. Azikiwe from his opponents and ultimately helping to secure an end to colonial rule. Bob became an integral part of that movement and they would go on to make giant strides towards the march for independence.

He was also an active member of the then nationalist political party, the National Council of Nigeria and Cameroons (NCNC) which later changed to become the National Council of Nigerian Citizens following the decision of Southern Cameroon to join the rest of Cameroon upon independence, a party through which the Zikist Movement, a vehicle of political reawakening among young people Nigeria found expression. Bob acted as Zik’s ADC among other numerous portfolios.

In furtherance of his contribution to the independence struggle, and with a view to educating and informing the Nigerian populace, Bob founded the Northern Advocate in 1948, a newspaper which like many at the time was used as a tool to fight the oppressive colonial government. He served as the publisher and editor-in-chief of the paper, a task he carried out excellently even without having formal journalism training.

But like every oppressive government, the British colonial masters were intolerant of opposition of any kind and it was not long before they came after Bob and his paper. He was charged with sedition and jailed, a development which led to the paper’s death in 1955, but his quest for Nigeria’s self-rule did not die. Upon his release, he continued to play a huge part in the anti colonial Zikist Movement and served the NCNC variously as its secretary and branch president.

Upon independence in 1960, he was appointed Assistant Secretary in the then Eastern Nigeria Development Corporation which effectively handled the affairs of the Eastern Region Development Corporation. His excellence once again stood out and within one year, he was promoted to the corporation’s Chief Administration Officer. He would remain in that position until 1966 when the troubles that culminated into the unfortunate civil war began. As the crushing civil war raged, Bob was faced with yet another independence struggle, the struggle to liberate his people; the people of Eastern Nigeria and he did not shy away from it, he played a prominent part in the Biafra struggles.

However in 1970 when the war ended with Biafra coerced into Nigeria, he continued his service to his fatherland in various capacities. He served as Managing Director, Agricultural Development Corporation in the then East Central State Government. Upon the creation of Imo State however, he became the founding General Manager of the new state government’s Agricultural Development Corporation and later served as Commissioner for Special Duties.

His amazing oratory, humour and skill had also saw him seen him serve the Nigerian Institute of Public Relations (NIPR) as its national president between 1980 and1984 within which period he was also elected president of the Federation of Africa Public Relations Associations (FAPRA), a position he held until 1987.

While Bob held sway in the public service, he remained a committed Christian having been an active member of the Methodist Church from childhood. He made immense contributions to the growth of the church through numerous humanitarian and selfless services. He was the Enugu State Arch Diocesan Lay President from 1992 to 1996 and later became the first Umuahia Arch-Diocesan Lay President of the church, a post he held from 1996 to 1999

But his humanitarian gestures did not find expression only through the church, he was also a strong member of the Rotary International through which foundation he has touched many lives. His services saw him rise to become the Director for District 911 of the Rotary International, Nigeria, a post he held between 1983 and 1984. During this time, he attended over 18 conventions of the club.

Bob is, indeed an epitome of success and as he marks another milestone today, one can only pray that God gives him more grace and more years on earth so he would continue to serve humanity.