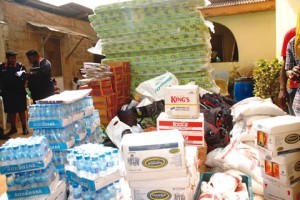 The Federal Government has ordered the release of additional relief materials to victims of insurgency in the North-East region.

The distribution of the fresh relief materials is expected to commence on Monday with registration and distribution by the National Emergency Management Agency and the Red Cross at all host communities in Gombe, Taraba and Bauchi states.

The move, according to the Chairman of the Presidential Initiative for the North East Prof. Soji Adelaja, became imperative in order to address the needs of the women and children that were recently rescued by the military from the Sambisa forest.

The military has recovered many towns from the Boko Haram militants in recent weeks, rescuing about a thousand women and children who were abducted by the insurgents.

A statement on Sunday by the spokesman of PINE, Odutayo Oluseyi, said the directive for the release of the relief materials was issued by Adelaja at the end of a meeting of the Special Committee on the Resettlement and Rehabilitation of Internally Displaced Persons.

While commending the special committee on the progress made so far, the chairman said the interim report would be submitted to the Federal Government very soon.

He also indicated that the interim report is only the first part of a strategic and comprehensive intervention plan for the economic redevelopment of the North-East which will be submitted to the in-coming administration.

“Government seeks to alleviate the sufferings of the people of the North-East and reintegrate them into their communities. PINE has mapped out a short, medium and long- term plan to reposition the North East region’s economy,” the statement quoted him to have said.

The new phase of distribution is expected to last for two weeks with PINE’s monitoring and evaluation officers working with NEMA and Red Cross on the field.