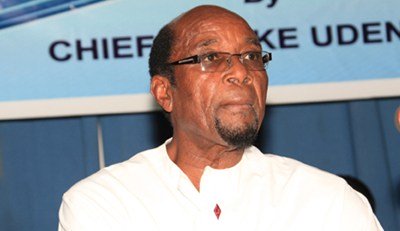 For a man imbued with the Maxist ideology, who radiated a revolutionary force, Comrade Uche Chukwumerije surely lived his life well. With a sprawling mansion built on a large expanse of land at Ngodo, Isuochi in Umunneochi local government area of Abia state, and a deep pocket that guaranteed his election into the National Assembly three times in a row, the Comrade indeed lived the life to its fullest.

A former student once testified that Chukwumerije’s wife, Princess Iweaka who retired as a school Principal is so beautiful that it was a pleasure to be in her class. She is an epitome of beauty and somehow the marriage to Chukwumerije could not last long enough. The Princess felt disappointed that Comrade Chukwumerije refused to allow her custody of the kids, and they both moved on with their lives till his death.

The Abia North Senator died at age 75, after a long but gallant battle with lung cancer on Sunday, the 19th of April, 2015. According to the family, “his life is many volumes, which can only be told with care and time, of dedication and focus, integrity and discipline, and an unbroken love for the highest ideals of our shared humanity.

Comrade Chukwumerije was a patriotic Nigerian who gave his all to the service of our fatherland. He developed an intellectual and activist career that distinguished him from the rest. The fact still remains that there is no controversy about his Igboness. The Senator Chukwumerije could easily be viewed from the lens of an ethnic rights crusader, but he was also a nationalist who contributed immensely to the development of Nigeria’s democracy. He loved his Igbo origin as much as he believed in the Nigerian state.

It is a truism that Comrade Chukwumerije was one of the Igbo leaders who never recovered from the defeat of  Biafra during the civil war. His role in the Biafra war is well documented and that is why his death marked the end of an era. Like the late Dim Chukwuemeka Odimegwu Ojukwu, the death of Chukwumerije has created a vacuum that will be difficult to fill in a generation.

His role in the burial of Ojukwu in which he served as deputy chairman of the burial committee brings to light the commitment of the one-time minister of Information to the Igbo cause. Perhaps that could have been one of his last major assignments for his people and he did not fail. He represented a generation of visionary leaders, a patriotic Nigerian who identified with the masses.

The history of his involvement in the military regime is one unresolved spot in his life. As the minister of Information under the regime of General Ibrahim Babangids (retd), Comrade Chukwumerije took on the pro-democracy groups and the revalidation of June 12 agitators. On this score, there are some who believe that a man has to do what he has to do regardless of whether it is appropriate or not. His life is a typical example of the dilemma of an educated and modern Igbo man.

On the floor of the Senate, Chukwumerije was virtually a lone ranger, yet a party man and one of the few politicians who won elections to the Senate on three different platforms. He was elected into the National Assembly on the platform of the Peoples Democratic Party, PDP, in 2003 after Senator Ike Nwachukwu opted to run for the presidency.

His opposition to Chief Olusegun Obasanjo’s third term bid painted him in bad light before the then leadership of the PDP. He defected to the Progressive Peoples Alliance with former governor of Abia state, Chief Orji Uzor Kalu, and got reelected to the Senate in 2007 on the platform of PPA. By 2010, when outgoing Abia state Governor, Chief T.A Orji could not sustain his relationship with his predecessor and boss, Orji Kalu, Comrade Chukwumerije along with the incumbent Governor T.A Orji decamped to the All Progressives Grand Alliance, APGA, and few months later he returned to the PDP.

There are contradictions that typified the life and times of Chukwumerije, yet he remained focused in the cause he believed in and sometimes pursued it at great personal risk.

It is the position of this Newspaper that Comrade Chukwumerije was an honourable man at a period where it was difficult to see such patriotism. We are deeply saddened by the loss of this great Nigerian and respected democratic icon who committed himself to the service of Nigeria.

While his death marks the passing of a generation, we also hold that the distinguished Senator did not do enough to champion the cause he believed in. He should have done more to promote human rights, equality and good governance.

In his tributes to the late Chukwumerije, the Senate President, David Mark said “Nigeria has lost an erudite and extra ordinary nationalist.” He lamented that Chukwumerije was one of the brightest and fertile minds in the Senate. ”He radiated intelligence, exemplary conduct in both public and private life. He was a team player who brought meaning to hard work. He was focused and determined to make positive difference”, Mark noted.

This Newspaper, the Igbo nation and indeed Nigeria will miss him.