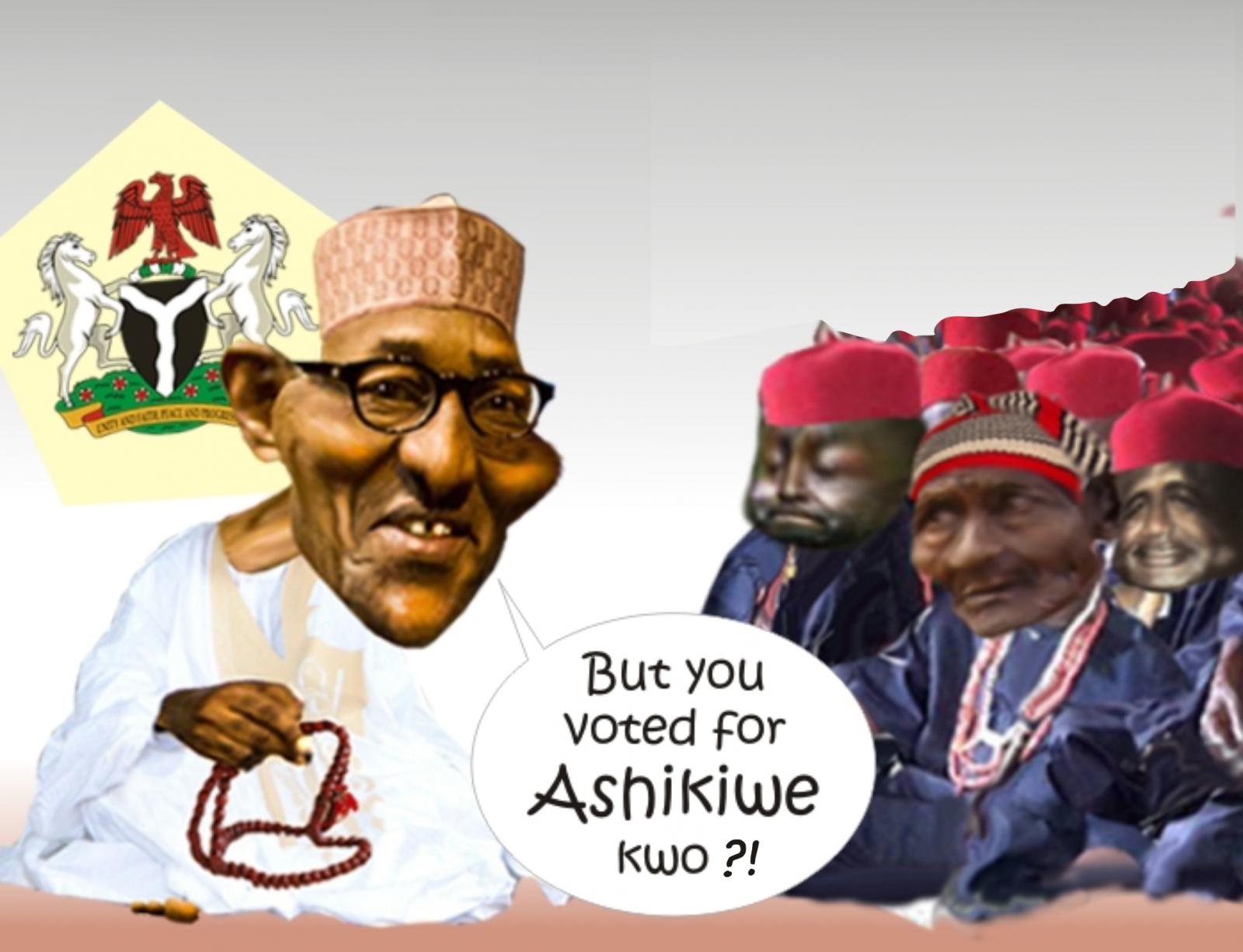 Given the controversy trailing the announcements of top government appointments by President Muhammadu Buhari, Business Hallmark conducted an investigation to determine how top level positions in the country are shared. The findings were quite revealing. CHIKA NWABUEZE reports:

There is widespread discontent especially among southerners over the lopsided nature of political appointments under the administration of President Muhammadu Buhari. In what looks like a deliberate policy that seemingly panders to northern interests, the majority of the appointments so far made by Mr. President appear skewed towards the North, which has taken control of strategic positions. A prominent feature of the new administration is that for the first time in the history of democratic governance in Nigeria, over seventy percent of key officials of the government are from a section of the country. This has set off a debate about its lacking in regional balance, and a violation of the federal character principle. However, the President has promised not to marginalize any part of the country.

Business Hallmark reports that the situation has taken such dimensions of interest due to the defective nature of Nigeria’s federalism, where states rely on the centre for their survival. Apart from the monthly federation allocation to states and local governments, there is also intense scramble for representation at the centre by states and regions. Accordingly, federal appointments are seen and regarded as a continuation of the gambit for resource allocation rather than the call to service. This is why every geo-political zone is jostling for strategic representation at the federal level where the resources of the country are distributed. The principles of federal character and quota system are all geared towards ensuring ethnic and geo-political balance in the allocation of federal offices, and to promote national unity.

The loud cries of marginalization by regions which felt shortchanged in the sharing of political positions in the country are so because every ethnic group wants its fair share of the ‘national cake;’ an arrangement that has become Nigeria’s albatross. It is also meant to ensure that no one ethnic group is seen to appropriate all the juicy offices in the land at the expense of the others.

Professor Jubril Aminu, a former senator and petroleum minister regretted in an interview with Business Hallmark that Nigerians now see federal appointments as merely additional resource allocation to the state of region from where the appointee hails, adding that until we see it as call to service we will always end up sacrificing merit on the altar of political or primordial sentiments. This mentality that appointments to political positions is to come and participate in the sharing of the pie has to stop if Nigeria must make any head way, said anothercommentator.

However, a cursory glance at the composition of the strategic political offices under the administration of President Buhari reveals a lopsidedness and inequality in the sharing of offices. In fact, among the top 12 positions, the South-East and South-South are the least represented. The South East has no appointment in Buhari’s government. This is why critics now refer to Mr. President as Nigeria’s most provincial leader ever.

“Buhari is the most provincial leader Nigeria has ever had,” said Ikechukwu Amaechi, Editor-in-Chief of The Niche, in a post on his Facebook wall. “He is not fit to be President of Nigeria. How can he continue appointing top officials of government from the North? Customs, Immigration bosses, SGF, Chief of Staff all from the North.”

The North West has the presidency, the Accountant General of the federation, the Managing Director of the Assets Management Company of Nigeria (AMCON), the Director-General of the Budget Office, the DG, Department of State Security, Managing Director of Nigeria Ports Authority (NPA), Chairman of INEC and the Chief of Protocol and Senior Special Assistant on Media and Publicity to the President.

This trend is however not without its precedents as under the late president Umaru Yar’Adua, the North West produced the president, the NSA, CBN governor, Finance minister, GMD NNPC, minister of petroleum, minister of Defence and Comptroller General of Customs.

Following the North West in terms of holding the largest chunk of strategic positions in Buhari’s administration is the North East region which occupies the offices of Speaker of the House of Representatives, the Chief Justice of the federation, CJN, the Secretary to the Government of the Federation, SGF, the Chief of Staff, Comptroller General of Customs, National Security Adviser, NSA, Chief of Army Staff, Chief of Air Staff and the Acting Director NIMASA.

The next in line is the North Central which holds the office of the Senate President in the person of Bukola Saraki. Other top positions held by the zone are the Comptroller-General of Immigration service, Kure Martin Abeshi; Chief of Defence Intelligence, Monday Riku Morgan and Director, Department Of Petroleum Resources, DPR, Modecai Baba Ladan.

In the South, the South-South is leading the pack in terms of holding strategic positions even more than the South West which contributed very heavily to the election of President Buhari. The region has produced the Group Managing Director of NNPC, Emmanuel Ibe Kachukwu; and continues to retain the CBN governor who had been appointed by former President Jonathan. Lately also, it has been awarded and/or retained the offices of the Chief of Naval Staff, Ibok-Ete Ekwe Ibas; Inspector General of Police; Special Adviser, Niger Delta Amnesty Office, Paul Boroh and Senior Special Assistant on National Assembly Matters (Senate), Senator Ita Enang.

Under the administration of Dr. Jonathan, the South-South had the president, CBN governor, Chief of Army Staff, Minister of Petroleum, Chief of Staff (until later), Minister of Education, Minister of Works, Minister of Niger Delta, DG NIMASA, FIRS boss and DSS DG; Ita Ekpeyong.

The South West trails the South-South in numbers of new appointments with the positions of Deputy Speaker of the House of Representatives, Executive Chairman, Federal Inland Revenue Service, FIRS, in the person of Babatunde Fowler; Special Adviser, media and publicity to the president, Femi Adesina and Chief of Defence Staff, Abayomi Olonishakin.

The South-East is the only zone that has no representation in the present government. This is being linked to the fact that the zone returned the least number of votes to Buhari’s election, followed by the South-South. It could be recalled that Mr. President had stirred the hornet’s nest during his visit to the U.S. a few months ago when he said that zones that contributed less votes would not get as much favour as those that gave him massive votes during the election.

This statement was interpreted as a justification for not giving the South East any slot in his key appointments. The only office the South East occupies is in the Senate where Ike Ekweremadu emerged as the deputy senate president against heavy odds.

During the presidential elections, the North West returned the highest number of votes to Buhari, followed by the North East, the North Central, the South West, South-South and South East. However, without the South West, Buhari’s emergence would not have been possible.

After making his last appointments of SGF, COS, Customs boss, etc, Buhari told a bewildered nation that he has to appoint people who have been with him right from the early days of his political journey which dates back to his ANPP and CPC days. He also said they were people he can trust. But analysts suggest that he is only being true to type in his sectional appointments given his antecedents.

In their reactions, Igbo leaders have resolved to adopt a ‘siddon look’ approach in the face of glaring acts of marginalization rather than complain as was the case in the past.

On his part, Yinka Odumakin, the spokesperson of Afenifere, said Mr. Buhari’s action poses grave danger to Nigeria. “It is not healthy for a plural society,” Mr. Odumakin, who was once Buhari’s spokesperson, said. He also punctured Buhari’s excuse that he selected competent people, saying there are competent people across all the regions.

Hon Chucks Ibegbu, a chieftain of Ohanaeze Ndigbo, while responding to the new development in the polity said that the problem of Ndigbo is not Buhari, as he means well for this country. He pointed out that former President Goodluck Jonathan gave the South East everything in terms of appointments, but they did not do anything with it. Jonathan gave us everything, what did we do with it?” he queried.

Okechukwu Okoroji, the All Progressive Grand Alliance, APGA, governorship aspirant in Lagos opined that the Igbo have nothing to regret because they voted out of their convictions. “What matters now is that we move up from there. We should begin to think eastwards in terms of our investments. The Igbo have developed every part of Nigeria without participating in government, and at the same time our investment pattern has denied the South East and South-South a fair share of private sector investment.

“The South East and South-South should stick together and form a united front and they can’t do that by prostrating for Buhari. We will be belittling ourselves if we go and beg. Buhari can’t do without us if we are united; he would have to negotiate. But I think we really have to wait and see how he governs; whether he will marginalize us.”

Many stakeholders are of the view that no matter what happens, the South East will be fully represented in the federal executive council. Already, Dr. Ogbonnaya Onu, who was tipped for the SGF position is among the ministerial nominees who have been screened and cleared. There is also Dr. Chris Ngige and several others. Are things then getting better? We wait.

Chief of Staff to the President: Abba Kyari, Borno