Home Headlines The many sins of former IGP, Suleiman Abba 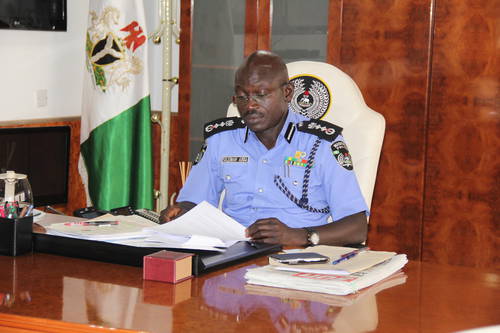 President Goodluck Jonathan, on Tuesday sacked Nigeria’s 17th indigenous Inspector General of Police, Suleiman Abba.
Mr. Abba was sacked barely 24 hours after the government of the United States of America commended him for good conduct during the just-concluded general elections.
He was immediately replaced by Solomon Arase, a Deputy Inspector General of Police in charge of the Force Criminal Intelligence and Investigation Department.
“Mr. Arase holds Bachelors and Masters Degrees in Law, as well as Bachelors and Masters Degrees in Political Science and Strategic Studies.
Before being relieved of his office, Mr. Abba had in various ways abused his powers as provided for in the 1999 Constitution.
For instance, on October 30, 2014, Mr. Abba had ordered the withdrawal of police aides attached to the Speaker of the House of Representatives, Aminu Tambuwal, a day after he defected from the Peoples Democratic Party, PDP, to the opposition All Progressives Congress, APC.
While defending the action, the embattled IGP, who is also a lawyer, said Mr. Tambuwal’s action breached Section 68 (1) (g) of the 1999 Constitution and that the lawmaker was therefore no longer entitled to police security.
Mr. Abba made the claim in a statement signed by Emmanuel Ojukwu, the force public relations officer.
But Mr. Tambuwal, also a lawyer, insisted that the former IGP’s explanation was inaccurate and misleading.
In a reaction by his media aide, Imam Imam, the speaker described Mr. Abba’s action as unconstitutional and a clear abuse of the powers of the office of the IGP.
Mr. Tambuwal also approached the Federal High Court in Abuja and obtained an order restraining the former IGP from withdrawing his security aides.

In a rare act of impunity, Mr. Abba disobeyed the court order and insisted that the speaker can longer enjoy police protection having defected from the party on which platform he contested and won an election to the House of Representatives.
On November 2, 2014, Femi Falana, a Senior Advocate of Nigeria, SAN, wrote to Mr. Abba, warning him of series of “illegal policing” being perpetrated under his watch.
Mr. Falana also accused the embattled former IGP of displaying “political bias”.
The lawyer listed some of Mr. Abba’s sins to include the arrest and dentition of over 700 top APC members in Osun state barely days before the state’s gubernatorial election on August 9, 2014;
The release of the detained party faithful without charging them to court for the breach of any known law or regulation in the country.
And the failure of the former IGP to call Joseph Mbu, a controversial Assistant Inspector General of Police, to order for his reckless abuse of police powers especially after a Federal Capital Territory High Court in Abuja delivered a judgment declaring the ban on the #BringBackOurGirls campaign group illegal, null and void.
“The ban was designed to assuage the feelings of some officials of the Federal Government who are embarrassed by being reminded of their constitutional duty of rescuing the over 200 Chibok school girls who were abducted 6 months ago by the nihilist Boko Haram sect,” Mr. Falana said.
Mr. Falana also faulted the former IGP’s insistence on withdrawing Mr. Tambuwal’s security aides on grounds that Mr. Abba failed to declare vacant, the seats of Ondo State lawmakers, who defected from the Labour Party to the PDP.
By showing bias against the speaker of the House of Representatives, Mr. Falana had insisted that the former IGP exposed the Nigeria Police Force to public ridicule.
But Mr. Abba’s sins did not stop at the controversial withdrawal of security aides of Mr. Tambuwal.
Shortly before the just concluded general elections, Mr. Abba openly countered a directive by the Independent National Electoral Commission that voters could wait at polling units and protect their votes.
In countering the directive, the former IGP warned the electorate to leave the polling units once they cast their votes.
He argued that allowing voters to wait after casing their votes could lead to a breakdown of law and order and promised that the police would ensure all votes count.

However, Mr. Abba’s directive was rejected by INEC, the leaders of the PDP, APC and even the wife of the President, Patience.
A few days after his directive came under strong criticism; the former IGP made a u-turn and said he never stopped voters from waiting after casting their ballots.
He said he merely “advised” them to leave. He said the police would prefer that voters leave to check violence.
“The police did not ban anyone from the polling units after casting their vote, we only advise people to cast their vote and leave the polling units,’’ Mr. Abba said.
Mr. Abba said Nigerians who wish to stay after voting should remain 300 metres away from the polling units in line with the Electoral Act.
Some Nigerians believe Mr. Abba was simply overzealous in order to please the presidency, the ruling Peoples Democratic Party and their agents.
“But even those he desperately tried to please have now removed him from office in ways that can be described as ignominious,” a top security expect said Wednesday. “This should serve as lessons to future IGPs.”