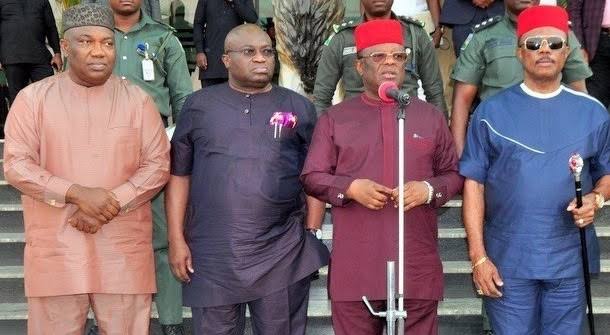 Governors of the Southeast geopolitical zone have backed down from their plan of forming regional security network to tackle growing menace of insecurity in the zone.

The governors who took the decision after meeting with the Inspector General of Police, Mohammed Adamu in Enugu in Enugu on Wednesday, said they have decided to key into the community policing initiative of the federal government.

Chairman of the forum and governor of Ebonyi State, Engr. Dave Umahi who who disclosed the decision in a communique at the end of the meeting, said the governors have decided to charge local leaders of communities with the responsibility of recruiting personnel for the community policing initiative.

“Taking into cognisance the existing security initiatives instituted by the governors of the states in the southeast geopolitical zone at the various local levels, such as the vigilante groups, the neighbourhood watch, forest guards, farmers/herders committees, the homeland gate keeping, etc, which are in conformity with the community policing strategy, the state governors have accepted and adopted community policing as an effective tool in bringing policing to the grassroots,” he said.

There were initial controversies over the meeting as the leadership of Ohanaeze Ndigbo and traditional rulers of the zone staged a walkout after being left waiting for long periods.

They had all arrived on time at the venue, Base 2 Event Centre filled to capacity and the police band was on hand entertaining. The event was to take off by 9am.

But as at 1P.m the governors were no where to be seen as the VIPs patiently waited.

At this stage, most of the dignitaries ran out of patience and the Anglican Archbishop of Enugu, Dr. Emmanuel Chukwuma announced to the audience:

“We are not here for music entertainment but for security issues. We have been here for hours waiting for these people and they are no where to be seen.

“This is how they toy with issues concerning Ndigbo. Why should they keep us waiting?

As if that was the whistle the VIPs were waiting for, the President General of Ohanaeze Ndigbo, Nnia Nwodo stood up and left the venue and was followed by many of the traditional rulers. 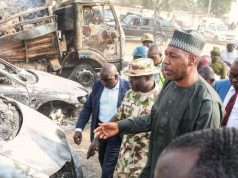