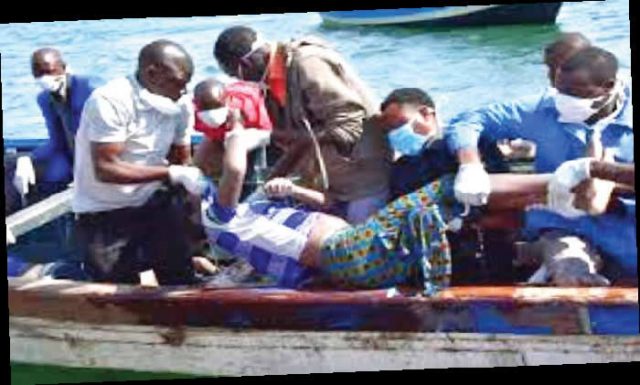 Mr. Desmond Amaugo, the sailor of the boat that capsized weekend at Umunankwo in Ogbaru local government area of Anambra State in which over 40 people died, has said that he was forced to embark on the ill-fated trip by female traders who were desperate to dispose of their crops harvested prematurely due to this year’s flood that submerged their farms before the maturity of the planted crops.

Amaugo also said that contrary to reports that 85 people were on board the boat, the actual number was 48.

The boat was carrying mostly women and children at the time of the incident.

He said: “I did not want to embark on that trip, but the people, mostly women, who were desperate to go to Nkwo Ogbakuba market to sell premature crops harvested from flooded farms, begged me to ferry them to the market.

“The market women besieged my house and persuaded me to sail them to Ogbakuba. Having taken off, the wave became too severe and all my attempts to control it failed. The water waves knocked the boat against the pillars of Umunnakwo/Ossomala bridge against all efforts I made to stabilize it.

“Suddenly, the boat capsized. It was terrible seeing people struggle for life.”

He said that the search team recovered 10 more bodies yesterday, adding that efforts were still being made to recover others.

Many people, including family members of the victims, were at the site of the incident, trying to see if the bodies of their relations could be found.

As the recovered corpses were brought to the shore, most of them could not contain their tears. Mr. Bernard Achonu from Isiala Mbano, Imo State, who resides in Mputu community said he lost his wife and three children aged between two and six years.

He said that his family joined the boat to move to a safe area as the flood had submerged almost all houses in the communities in Ogbaru, regretting that the attempt to secure them had turned out to be a misadventure.

Another person, Sebastian Umeorji, who said he was still searching for the body of his wife was sobbing uncontrollably.

Meanwhile, the entire Ogbaru local government area has been cut off from the rest of Anambra State as the River Niger has overflown on the Onitsha – Atani- Osomala – Ogwu -Ikpele road, which is the only access route to the local government.

President Muhammadu Buhari has expressed sadness over the boat accident .

The President according to a statement by his Senior Special Assistant on Media and Publicity, Garba Shehu has directed all other rescue and relief agencies to rush to the site of the accident.

He also directed the relevant agencies of government to check the safety protocols on these transport ferries to make sure such incidents are avoided in the future.

President Buhari said he was saddened by the boat accident and directed that all possible efforts be made to account for all the passengers.

“I pray for the repose of the souls of the deceased and for everyone’s safety, as well as the well-being of the family members of the victims of this tragic accident,” said the President.

This is even as the Presidential Candidate of the Labour Party, Mr. Peter Obi expressed shock at the level of flooding, which has caused serious devastations in different parts of the country, including Anambra State.

In a release signed personally by Obi, he said he was saddened to behold the devastation caused by floods in different parts of the country. “Considering the level of widespread suffering in the land, anything that adds to the suffering of the people, such as the flood is heart-breaking,” Obi said while assuring all those affected that he shares in their sorrows.

He also pointed out that the destruction of 10,000 hectares of rice farms belonging to Olams Nigeria Limited in Nassarawa State, by floods, is a huge loss to the nation. He regretted that such flooding of farmlands cause huge losses to their owners and would result in food scarcity in the future.

Recalling when such flooding took place in Anambra State in 2012 when he was the Governor, Obi said he remembered how the then Secretary to the State Government, Mr. Oseloka Obaze, informed him at 2 pm about the disaster and how he toured the entire flood-ravaged communities and joined the rescue operations.