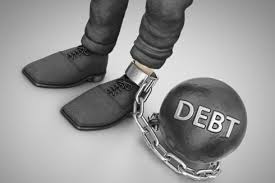 Every Nigerian alive today and those who will be born in the next two years or more are already neck deep in debt. But even with this, part of the irony is that not many people know that they are debtors by virtue of the indebtedness of the country.

Experts explain that public debt is how much a country owes to lenders outside of itself. These can include individuals, businesses, and even other governments. The term “public debt” is often used interchangeably with the term sovereign debt.
Public debt according to them usually only refers to national debt. Some countries also include the debt owed by states, provinces, and municipalities. Therefore, experts advise on the need for caution when comparing public debt between countries to make sure the definitions are the same.

Nigeria’s ballooning debt profile has raised major concerns from various stakeholders. The last time Business Hallmark research showed that Nigeria already owes as much as N32trillion ( $86.39billion) and nurses plans to borrow more. The federal Government feels convinced that since its debt-to GDP ratio was still below 25% per cent, it still has a lot of room to accommodate more debts.
The Minister of Finance, Budget and National planning Mrs. Zainab Ahmed made a public statement recently that although the country has expanded its borrowing portfolio, it was still below 25 per cent of debt-to-GDP ratio and within borrowing limit.

She said: “The total borrowing of the country as of 31 of December (2020) is 21.6 per cent of the GDP. So, if we were not looking at adding the other category of loans that I mentioned, we don’t even need to increase that at this time.

As of 2019, the debt-to-GDP ratio was 19.2 per cent, so only two per cent was added.” According to her, though the loan issue is a touchy one, it is not out of place for government to borrow to stay afloat while striving to increase its revenue.

Details show that Nigeria has a deficit of N5.2trillion, representing 3.6 per cent of the N13.5trillion. Nigeria will spending about 60 per cent of its revenues as interest on the loans burden. The country expects revenue of about N8trillion which it is not absolutely sure to realise given the head winds and other challenges.
In this instance, the government may be borrowing a leaf from economies that have sustainable ways of servicing and refunding the loans as and when due.

For instance, in October 2020, the total U.S. debt was over $27 trillion. The debt-to-GDP ratio was 139% at that time. That’s based on the second quarter 2020 GDP of $19.5 trillion. Whereas the U.S economy and other developed economies are productive and can realise good revenues, Nigeria is still a mono-economy depending up 80 per cent for its foreign exchange inflow. The development does not place Nigeria on the same pedestal with the developed economies. Unfortunately, as the debt stock of Nigeria continues to rise, an expert who wouldn’t want to be mentioned said Governments tend to take on too much debt because the benefits make them popular with voters. Increasing the debt allows government leaders to increase spending without raising taxes.

Investors usually measure the level of risk by comparing debt to a country’s total economic output, known as gross domestic product (GDP). The debt- to -GDP ratio gives an indication of how likely the country can pay off its debt.

Some economists explained that a country’s debt is sustainable if it is able to finance its debt obligations without external help or going into default.

The fear of many discerning Nigerians has been that the country’s debt may be headed to about $40billion if conscious effort is ignored to apply adequate strategies.
But many experts have faulted this line of argument of the government on debt ratio to GDP instead of using debt ratio to revenue. Already analysts believe that the nation is being plunged into another round of deeper indebtedness given that debt to revenue now stands at about 60 per cent.

‘’Now, public debt is on the rise again, driven by aggressive borrowing by the present administration and currency devaluation that has further increased the size of the foreign debt. Many international bodies such as the World Bank have raised concern over the speed and scale of Nigeria’s borrowing, often highlighting its weak Debt Servicing Ratio’’, an analyst who pleaded anonymity said.

An respectable economist and former Managing Director of a big bank in Nigeria, Mr. Emma Nwosu had in an article argued that, “The Minister of Finance begs the question by rationalizing the borrowing spree with her purported 21 per cent Debt to GDP Ratio, relative to the universally acceptable 50 – 55 per cent. She ought to know that GDP-based ratios could only be presumed for dynamic economies, with efficient allocation and domestic capacity to respond promptly to government spending and other measures for driving the economy to a new equilibrium. It is the Debt to Revenue Ratio that applies to inelastic, mono-product and import-dependent economies like ours. Transition is not imminent either. Our rulers are primarily interested in measures for clinging to power. The ones for economic transformations are secondary and half-hearted.

‘’By maintainable revenues, Nigeria is over-borrowed and has crossed the threshold of the debt trap, as would be demonstrated. The economic outlook is very bad. Crude oil and Gross Domestic Product (GDP) are in decline. There is the threat of full-blown recession, accelerated by Covid-19 lockdown. Tax coverage and other sources of revenue remain limited.

The ethical track record of the government is also bad. He added.
There is a consensus that the level of debt that an economy can bear depends on numerous factors: the economy’s expected rate of economic growth; whether domestic or foreign borrowers, or domestic government institutions, own debt; the country’s fiscal capacity; inflationary expectations; currency risk; and default risk. While it easy to determine where Nigeria ranks in this parameter now given the new budget, both local and international communities are aware that the country economy is very weak in every standard measurement. However, Nigeria’s debt to Gross Domestic Product may look good, but analysts believe that the devil is in the details of debt to revenue and servicing.

On his part, the banker and public personality, Dr. Alex Otti has opined about the need to open the eyes of many Nigerians to the sad and alarming situation of the country’s indebtedness. He stresses that the issue was not in accumulating debt but in the capacity to service it.

Economists define debt service as the cash that is required to cover the repayment of interest and principal on a debt for a particular period. … This ratio helps to determine the borrower’s ability to make debt service payments because it compares the company’s net income to the amount of principal and interest the firm must pay.

According to them debt service ratio is the ratio of debt service payments (principal + interest) of a country to that country’s export earnings. A country’s international finances are healthier when this ratio is low.

Amongst other things, there is a structural defect, that ensures that we spend over 70% of our budget on recurrent expenditure and less than 30% on Capital expenditure. The recurrent vote goes mostly into running government while the rest of the people are meant to benefit from the capital expenditure.

Our final submission is that we must restructure this country to streamline and tame cost of governance and focus on pulling our people out of poverty. We can choose to do it voluntarily or wait for economic forces to force us to do it. The choice is ours,” Otti reportedly expressed in an interview with a newspaper in Nigeria recently.

Did the Holy Book not say that the borrower is slave to the lender? These are indeed quite troubling times.