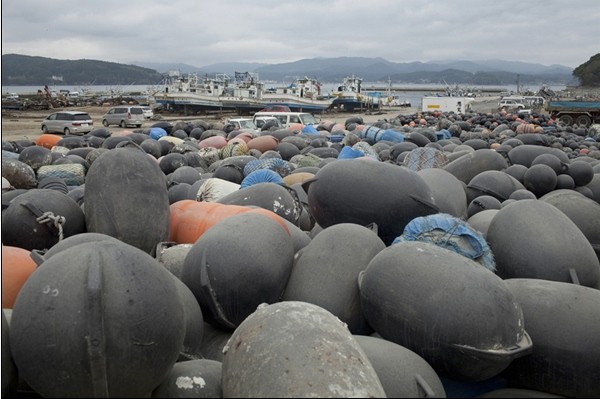 The Nigerian Ports Authority (NPA) may have taken to a higher notch the pervasive impunity and utter disregard for due process among government agencies over the controversial contract award for 100 navigational buoys.

For six years running, NPA has consistently flouted the presidential directive to acquire, through public procurement order, 100 buoys which are vital to safe navigation of vessels and other crafts.

However, the agency’s subtle efforts to frustrate the contractor, Marine Energy Limited, in flagrant violation of official directive to the contrary, has stalled the procurement and installation of the vital equipment at Lagos, Warri and Port Harcourt, the locations which the buoys are meant for, thereby imperil safe navigation of vessels in these channels.

The action of successive NPA managements in the controversial contract award of the buoys commenced August 10, 2010 when the former administration of Alhaji Omar Suleiman advertised the contract via public notice no 3748, to which 25 companies made tenders for the job before they were pruned down to eight and pre-qualified for final selection.

Curiously, Marina Energy, which came first on the ranking list of financial responsive bids with the lowest price of $3,574,216.80 and second in technical bidding process with 85% was ditched in the process.

Suspecting possible foul play, the company, it was gathered, petitioned the Presidency, the Federal Ministry of Transport, the Independent Corrupt Practices and Other Related Offences Commission (ICPC), the Economic and Financial Crimes Commission (EFCC) and the Bureau of Public Procurement (BPP).

Consequently, on the orders of the Presidency, the relevant authorities investigated the allegations of corruption and lack of transparency leveled against the NPA in the award of the contract.

It was learnt that the ICPC investigating team, comprising Messrs Adebayo Kayode, Esu Mbang and Bashiru Dagaro, in its report, observed that the contract was allegedly fraudulently awarded to Abhal Ventures, noting that the process lacked transparency and did not follow due process.

It was gathered that the investigating team discovered that the NPA management allegedly falsely classified the contract as “works” instead of “supplies”, in order to meet the limit of Ministerial Tender Board (MTB), rather than those of the BPP and the Federal Executive council (FEC).

The investigating team, it was further learnt, also discovered that the NPA had allegedly, with a speed of lightening, advanced and paid within 48 hours 15% of the total amount quoted by Abhal Ventures as mobilization fees.

It was gathered that Abhal Ventures Limited which got the award letter on June 2nd, 2011, allegedly requested for advance payment of 15% on June 6, 2011, and the NPA raised a payment voucher on June 8th, 2011, with reference number H/Q14195 and number A.227/sundry/FX/246. The said 15% of the sum total of the contract quoted by Abhal Ventures, it was learnt, was released to the company same day in a payment authority marked NPFRX, and dated June 8th, 2011, with number 0013952.

The payment voucher was signed by Messrs Adetola Atekoja and Omar Suleiman, the then NPA Executive Director, Finance and Administration and Managing Director, respectively.

Following these findings, the ICPC and the BPP, acting on the Presidency’s directives, had asked the NPA to withdraw the contract from Abhal Ventures and re-award same to Marina Energy Limited, which was found to have met all the criteria for the award. The NPA, it was gathered, was also directed to immediately retrieve the sum of $867,242322.00 (about N 138,758,720.00), that had been paid as 15% mobilization fees to Abhal Ventures.

The FEC had approved the award of the contract to Messrs Marina Energy Limited in October 2013. After one of the weekly Wednesday meetings of the FEC, the then Minister of Transport, Senator Umar Idris, had stated: “Today, I brought a memo to the council, seeking the approval on contract, and council approved a contract for the construction, delivery and commissioning of 100 number R-class, MDPE channel-marking buoys for the Nigerian Ports Authority in favour of Messrs Marina Energy Limited in the sum of $3.5million, inclusive of all taxes, with the completion period of 25 months”.

In addition, the Director-General of Bureau Of Public Procurement (BPP), Engr.  Emeka Eze, had written two memos to the then Minister of Transport, discrediting the purported contract given to Abhal Ventures Limited.

In June 24th, 2011, Eze, in a memo with reference number BPP/5.1/CCMD/11/Vol.11/813 told the Minister that the NPA’s ‘’purported award and acceptance of offer by Ahbal Ventures is null and void as only the Federal Executive Council can make the award’’

As a follow up, Eze also forwarded yet another memo to the then Minister titled ‘’Due Process Review Report on Contract for the Procurement of 100 No.Channel Buoys for Nigerian Ports Authority(NPA) dated September 15th, 2011 with reference number BPP/RPT/11/Vol.1/134.

The memo states that’’ please find herein attached a revised Due Process Review Report No.BPP/DPR/AO1/MDU/REPORT/2011/053 dated September, 2011 on the above-named project.‘’The Honourable Minister’s attention is kindly drawn to the Section 8.0 of the Review Report for consideration and further necessary action.

‘’In view of the above, Due Process Certificate of ‘’No Objection’’ cannot be granted for the procurement of 100 No. Channel Buoys for Nigerian Ports Authority(NPA) in favour of Messrs Abhal Ventures Ltd at the contract sum of US$5,781,615.

‘’However, Due Process Certificate of ‘’No Objection’’ can be granted for the procurement of 100 No. Channel Buoys for Nigerian Ports Authority(NPA) in favour of Messrs Marina Energy Limited at the contract sum of US$3,574,216.00’’.

It was on the strength of these memos that the then Minister of Transport, Senator Umar Idris presented a memo to the FEC in October 2013, seeking the approval of the contract for Marina Energy, having certified all criteria and issued certificate of ‘’No objection’’ by BPP.

The council consequently approved the contract.

Curiously, four years after this proclamation and approval by FEC, the NPA is allegedly frustrating the commencement of the approved project. The Managing Director of Marina Energy Limited, Oladipo Akinjole, revealed that the NPA had only paid 10% of the total sum approved by the Federal Government for the contract.

The NPA’s reluctance to pay the appropriate mobilization fee to Marina Energy Limited contrasts sharply with the alacrity it funded Abhal Ventures Limited which was fraudulently awarded the contract. Lamenting that all efforts to make NPA pay the remaining 5% to make up for the 15% per statutory mobilization fee have been ignored by the agency, Akinjole said: “We have written the NPA severally, appealing for the release of the money to enable us carry out the contract, but they have rebuffed all our pleas.”

Apart from blatantly disregarding Federal Government’s directive, the NPA is alleged to have refused to initiate the process to retrieve the $867,242.00 it paid as 15% mobilization fee to Abhal Ventures.

It was further gathered that the alleged recalcitrance of the NPA management to execute the orders of the presidency in the matter may have inspired Abhal Ventures to demand for the payment of the outstanding fee for a contract it lacked the authority to execute.

It was learnt that the Chairman Of Abhal Ventures Limited, Alhaji Abdulraman Halilu Girei, had in a petition dated December 23, 2013, and addressed to the then President Goodluck Jonathan, allegedly claiming that his company won the contract in a “competitive and open process”, lamenting that the award was “unfairly and improperly terminated”. The petitioner, it was gathered, sought for the restoration of the contract and the full payment of the contract sum.

However, despite the frustration and refusal of the NPA to complete the mandatory 15 per cent mobilization fee, Otunba Akinjole stated that his company still went ahead to produce 38 buoys which have been lying fallow at the manufacturer’s yard in Australia due to the refusal of the NPA to come for their inspection after repeated requests by Marina Energy.

The manufacturer, Sealite in Australia, frustrated by the antics of NPA, has written to the contractor to hasten the process of inspection in a bid to evacuate the produced buoys which it lamented have taken up the space in their yard.

In a letter dated March 22, 2017 and signed by one Anthony Parker, the Manufacturer’s Business Development Manager for Africa, the Australian firm asked Marina Energy to liaise with the NPA to nominate its representative who has technical knowledge of Marine Buoys for factory assessment before they could embark on further production of the remaining buoys.

‘’Our earlier letter dated 23rd May, 2014 in respect of the 32 buoys already produced was not responded to. It is imperative to hasten up the factory assessment as the ones produced are obstructing our space’’, the manufacturers lamented.

Two years after the request for inspection, the NPA has still not deemed it fit to carry out the assessment.

However, Akinjole has accused the current management of NPA led by Ms. Hadiza Usman of mischief and bared faced-bias in the controversial contract award as it has allegedly resorted to delay tactics in its bid to truncate the contract his company legally won in 2011.

‘’They (NPA) have resorted to grandstanding and delay tactics to frustrate our efforts to continue with the contract. The current NPA management has rebuffed all efforts to make them come for inspection of the 32 buoys we have produced through our foreign partners in Australia.

‘’We had to call for inspection when they started asking for contract specifications, six years after the contract had been awarded and partially carried out, an attempt we felt was part of the grand design to frustrate us’’, Akinjole declared.

He further disclosed that at the prompting of NPA, Abhal Ventures, the company that was wrongly awarded the contract and paid an illegal 15 per cent mobilization to which the government has directed its retrieval, has gone to court to stop the NPA from retrieving the money it fraudulently collected.

It was further gathered that to further frustrate Marina Energy in its effort to claim its mandate, the incumbent NPA management is planning to procure 86 buoys directly from manufacturers, thus putting paid to the 100 buoys contracted out and for which huge amount of money has been paid.

‘’We are using this opportunity to advise the BPP not to issue certificate of’’ No Objection’’ to the NPA as it is going to be a sheer waste of public funds.

The Managing Director of NPA, Ms Hadiza Usman acknowledged the controversy trailing the procurement and installation of the 100 buoys and regretted the way the preceding management handled the matter.

While speaking with Business Hallmark at an interactive press conference in Lagos, the NPA MD said there was nothing the present management could do until the court disposes off the case.

The Federal High court in Lagos which was hearing the matter instituted by Abhal Ventures Limited against the NPA, is expected to continue with the hearing of both parties this January.

However, Ms Hadiza confirmed the plan by the NPA to directly procure 86 buoys as the agency cannot eternally wait until the case is disposed off before procuring these vital navigational aids.

She however promised to do the needful as soon as the case is disposed off in order to allow Marina Energy carry out the contract it legitimately won.