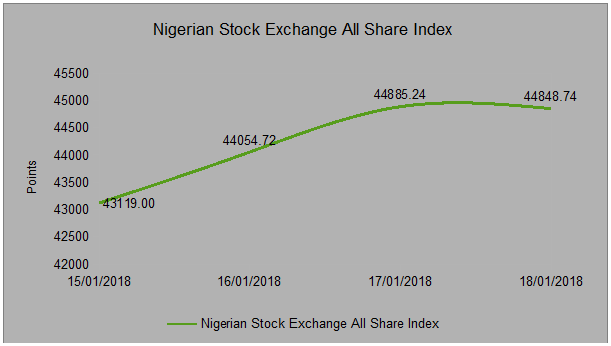 Profit-taking caused the Nigerian Stock market to go bearish for the first time this week after reaching over nine year high on Wednesday.

The Nigerian bourse has delivered 17.27 per cent year-to-date return, one of the highest globally and it grew 42.3 per cent to emerge the third best performed equities market globally in 2017. The market has been rallying since oil price rebounded in April 2016 and  the country’s  forex market improved, following the introduction of the Investors’ and Exporters’ Forex Windowon April 24, 2017, which helped raise investors’ confidence in the capital market.

Downward movement of the country’s inflation which stood at 15.37 per cent in December 2017, Nigeria’s improvement in World Bank’s Better Ease of Doing Business Index and its exit from recession in the second quarter of last year also buoyed the performance of the equities market.