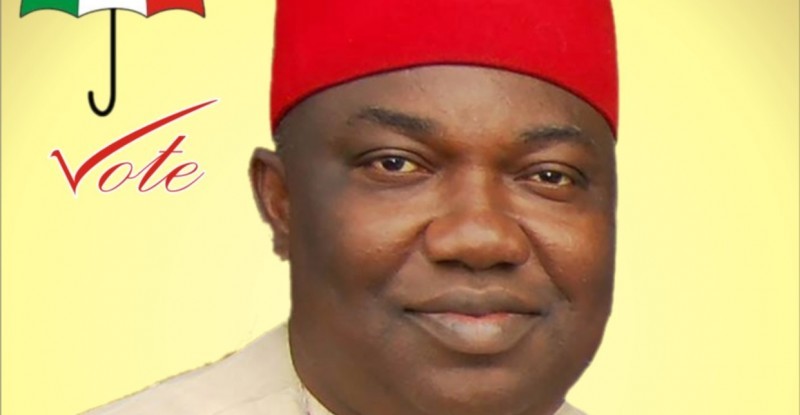 It was a swift victory for Hon. Ifeanyi Ugwuanyi, the governor-elect of Enugu State who emerged in the recently concluded governorship election in the state. As the amiable House member representing Udenu/Igbo Eze North Federal Constituency prepares to take over the mantle of Enugu State leadership from the incumbent Governor Sullivan Chime, we look at the huddles before him and tasks ahead of him governor.

The first huddle the governor elect would have to scale through is obviously, an impending appeal filled by Senator Ayogu Eze against the decision of an Abuja High Court which validated Ugwuanyi’s candidature for the governorship election. Eze had emerged winner in a parallel primary election held at Filbon Hotel, Enugu and has been insisting that he was the real candidate of the party, since according to him, he was elected by delegates of the party chosen at the party’s ward congress. His claims however, had gone unheeded by the Independent National Electoral Commission (INEC) which went ahead to hand the party’s flag to Ugwuanyi prompting him to head to court.

Despite losing in the initial case he filed against Ugwuanyi’s candidature at a Federal High court sitting in Abuja, Eze is still understandably insisting that he is the authentic candidate of the party and had since. According to close sources, appealed the judgment of the Abuja High Court which ended in the former’s favour.

“I can confirm that there is a notice of appeal on the judgment, the level of optimism has always been high among the supporters of Senator Eze,” confirmed the senator’s Personal Assistant (PA), Mr. Chika Eze in a chat with Hallmark.

The PA however, noted that both Eze and Ugwuanyi could still settle the matter out of court since according to him, “they are brothers and as brothers, they can always settle their differences.”

Nonetheless, the impending appeal ideally may constitute a source of worry to the governor-elect, especially considering the recent judgment that went in favour of Hon. Patrick Asadu which saw the lawmaker retain his seat as member representing Nsukka/Igbo-Eze South Federal Constituency in the House of Representatives, taking the mandate from Engr. Ik Ugwuegede who had campaigned as the PDP candidate and was declared winner of the election. Asadu had like Eze, under very similar circumstances emerged in a parallel primary in December last year.

Another task before the governor-elect is winning the support of his Orba community and by extension the Udenu Local Government where he is largely unpopular.

While Ugwuanyi had seen his popularity among the greater population of Enugu people surge in the months leading to the 2015 governorship election in the state, which basically gave him a landslide victory over his closest rival, Barr Okey Ezea of the All Progressive Congress (APC) in the election, it sounds bizarre to point out that he did not attract much support from his Orba community and the Udenu Local Government at large.

When he was announced as the Peoples Democratic Party flag bearer for instance, the APC gradually became a party of choice for a good number of Orba people who accuse Ugwuanyi of having neglected the community since he became a lawmaker in the lower chamber of the National Assembly.

It was said for instance that while he erected mansions in his home and tarred the road leading to it, he had not contributed much to the community and had ended the road construction as soon as it got to his house.

“Ugwuanyi doesn’t help people, when he finished his house, he constructed a road to the house and made sure the road didn’t go beyond his house because he didn’t want others to benefit. A lot of people in Orba here don’t like him,” said Chuka Onah, an indigene of the community.

The challenge before the lawmaker therefore is be to re-establish trust and confidence between himself and his community by offering them the dividends of democracy. After all, charity, they say begins at home. The general lack of good road networks as well as other amenities such pipe born water in the Enugu North zone, which had informed their clamour to produce governor means that Ugwuanyi owe a lot to his constituency.

While one would not expect him to focus only on his zone while delivering projects in the state, he is expected at least to pay attention to some of the pressing developmental needs of his people.

The governor-elect will importantly also have to, if he considers it necessary, work towards repositioning and raising the stake of the Coal City State as a foremost state in the South East. Enugu, which had thrived as the capital of the old Eastern Region has witnessed dwindling fortunes since the country was divided into geopolitical zones thus creating a situation where the South East has no rallying point in politics.

This could mainly be attributed to the fact that those who have governed the state over the years never considered it necessary to play national politics by asserting themselves as leaders of the foremost state in Igbo land which implies by default, leaders of the South East Zone.

Dr. Chimaroke Nnamani who led the state from 1999 to 2007 for instance was hardly known beyond the state as he was neither a player at the national level nor at the regional level.