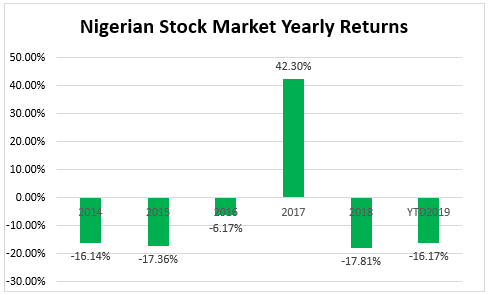 The Nigerian capital market is once again shaping for a negative this year with 64 days left before it comes to an end. Curiously, the bearish market has persisted, leaving the major index prostate at the negative corner of -16 per cent as at Friday, October 25, 2019. The All Share Index (ASI) which opened on January 3, 2019 at 30, 771,32 points has slid to 26,348.73 basis points.

The same trend should naturally cause a plunge in the market capitalization but for the listing of the giant telecom company’s including MTN Nigeria and Airtel Nigeria which bloated number of shares.

This week the equities market lost 0.15 per cent from Monday to Friday 25, 2019 while the index eased by 0.03 per cent from Thursday 24, 2019 to Friday. N20billion however, slipped through the hands of investors as the market capitalization plunged N12.846 trillion to N12.826 trillion in one week.

Individual stocks are not any better as the economy has not offered good incentives to attract investors both local and foreign.

Meanwhile, market indicators of the Nigerian Stock Exchange (NSE) closed trading on Friday with a marginal decline of 0.03 per cent.

A breakdown of the price movement shows Guinness recorded the highest loss, shedding N2.60 to close at N23.85 per share.

On the other hand, Guaranty Trust Bank led the gainers’ table, gaining 30k to close at N26.30 per share.

This was followed by Zenith Bank with an account of 74.49 million shares valued at N1.27 billion.