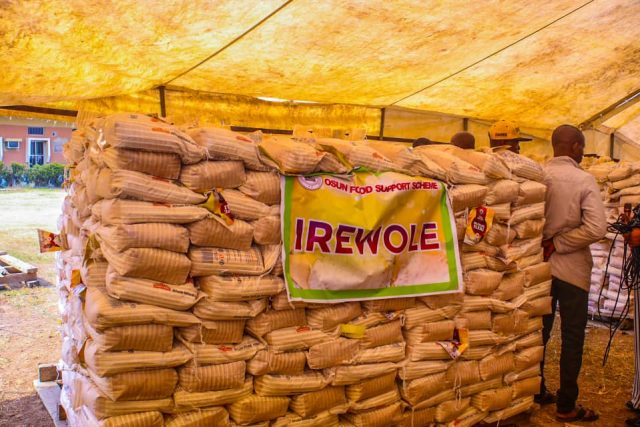 Osun State Government on Friday reaffirmed its commitment to sustaining the monthly Food Support Scheme initiated to cushion the effects of the national economic downturn on vulnerable citizens of the state.

The government disclosed that nothing would stop the initiative as it was committed to championing the welfare and general well-being of the people, particularly the vulnerable segment of the populace, saying the positive feedback received from the beneficiaries have justified its noble intent.

It further disclosed that over 300,000 vulnerable households had benefited directly while many had also benefitted indirectly since the inauguration of the Scheme.

This is even as the government flagged off the 10th edition of the scheme and commenced immediate distribution of the food items to the beneficiaries.

Addressing journalists shortly after the flag-off which held at the open ground of the Local Government Service Commission, State Government Secretariat, Abere, Osogbo, Governor Oyetola said his administration had impacted positively on the lives of beneficiaries of the scheme.

Oyetola who was represented by the Secretary to the State Government, Prince Wole Oyebamiji, said the responses from the beneficiaries had justified the noble intent of the government to run participatory and all inclusive governance where democratic dividends would be seen and equally felt by the citizens.

Governor Oyetola said the scheme had in the last ten months of its inauguration, contributed to the economy of the State and general welfare and well-being of the vulnerable citizens who are the direct beneficiaries.

“Sincerely speaking, the feedback has been quite encouraging, the people of the State have displayed high sense of appreciation to our wonderful work in the area of infrastructure development and especially in the area of food support, the feedback we are getting is a well done job and they are appreciative of it.

“As you all know, this is the 10th edition of the programme and by implications, over 300,000 family units of vulnerable citizens and households have been fed and benefitted through this laudable initiative and they are saying it is a promise fulfilled.

“We have proved our capacity and capability to ensure the sustenance of this scheme contrary to what some people were saying that we won’t be able to sustain it, but today, we have proved them wrong.

“We are not unmindful of the local industries that are into food productions, for instance, last month, we distributed Ofada rice locally produced and sourced from our local farmers and by next month, we are looking at another local food that would be distributed to the vulnerable citizens.

“This is to encourage local entrepreneurs because our focus is to grow local productions, improve on our productivity and support agro-allied industries to grow for the overall development of our dear State”, he added.

Also, the Commissioner for Regional Integration and Special Duties, Hon. Lekan Badmus, lauded the Governor for placing the scheme on his priority list.

Badmus disclosed that the market approach adopted to further strengthen the distribution of the foods had earned the government applause as beneficiaries were excited and prayed for its continuity.

“As we all know, during the official flag off of this Scheme, Mr. Governor actually mentioned that the programme will run throughout his tenure in office. And to actualise this, Mr Governor has actually shown capacity and genuineness, and you will agree with me that foods are being shared among the 30,000 vulnerable citizens in the State on monthly basis.

“We have actually reached out to over 50 markets in six Federal Constituencies in addition to the social register adopted for distribution and the feedback has been very encouraging as many of the beneficiaries have lauded the government on the initiative.

“In developing this further, Mr Governor has also emphasised on local contents which we have been doing and we are looking at the possibility of getting more local staple foods as part of efforts to boost the economy of the State, encourage local entrepreneurs and farmers in particular.

“Initially people were scared on how we are going to finance and sustain this, but Mr Governor has been able to show his financial prowess in ensuring that this has been successfully and it is my firm belief that this is going to be sustained for as long as we are in government”, he added.