Prince Emeka Obasi was a dreamer who saw visions and translated them into physical realities. Intellectually, he stood shoulders higher than his peers. He was a giant and would not cower for lesser mortals. He saw the world as a terrain where each must conquer and own his/her own little space. He conquered his and held on.

Prince Emeka tells the real Nigerian story of rising from grass through grace and stepping to the palace. He was a man of ideas and excellent writer. He read voraciously and was a leader who led from the front.

His mien was that of a soldier: Stern, unsmiling, it was a front. “Prince Emeka Obasi was serious minded, committed to any cause he sets his mind on – highly focused. He had a high sense of humour and was sociable”, say Mr. Silas Udo. a journalist and course mate at the University of Calabar.

“We worked on so many projects, and you were a fantastic boss and a complete beautiful gentleman”, wrote Iyabo Adeline Lawanni in a tribute.

Attracted to the glitz, glamour and influence of journalism, Emeka, after serving as a Youth Corper at defunct May-Ellen Ezekiel’s Classique magazine, aspired to play big stakes in journalism.

His first offering, Hallmark newspaper, which began as a weekly attracted virtually who is who in the Lagos newspaper arena then and Mr. Igbonekwu Ogazimorah who later served as Enugu State Commissioner for Information was the pioneer editor.

Hallmark, a general interest newspaper in the newspaper industry was like a boat competing for space on the high seas with ocean liners. Emeka kept his thinking hat on and collapsing Hallmark much later, caused National Mirror to spring up in its stead.

National Mirror was a major success, and attracted the interest of the noveau riche, Jimoh Ibrahim who bought it over.
Prince Emeka, endlessly tinkering with ideas, always analytical, resurrected Hallmark as Business Hallmark – a niche he had always been at home in…

Beyond newspapering, Emeka was the brains behind Awolowo Foundation, he was at heart an Awoist though never straying into partisan politics.

Forced out of Awolowo Foundation, he founded Public Policy Research and Analysis Centre, PPRAC which annually confers the Zik’s Prize on Leadership to deserving individuals.

He also served as Commissioner for Information and Strategy in his Abia home state under Governor Orji Uzor Kalu
His biography, ‘Saved for His Praise’ centered on the illness he battled and triumphed over.
Prince Emeka is survived by his loving wife, Dr ( Mrs) Betty Obasi. Emeka. Jnr, Onyedikachi, Kamsi and Miracle.

Good bye my Prince of the Niger, South! You were a beautiful soul. Goodbye Ezenwata of Ibeku Ancient Kingdom. Rest in Peace. Rest brother. 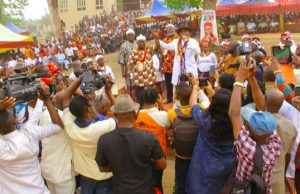