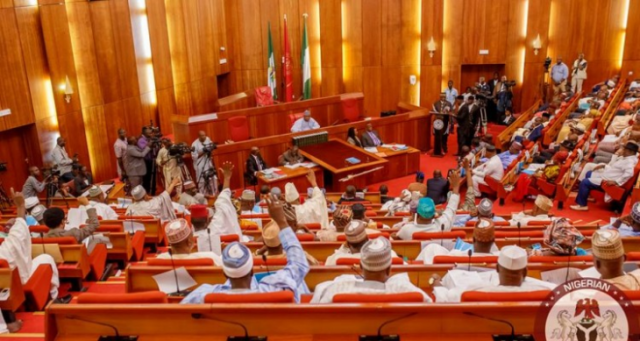 The Nigerian Senate on Thursday denied the Independent National Electoral Commission (INEC) the power to transmit results of elections electronically.

The lawmakers empowered the Nigerian Communications Commission (NCC) and the National Assembly to determine the use of electronic transmission in an election.

A total of 52 senators voted in favour of granting the powers to the NCC and NASS while 28 voted against it. A total of 28 senators were absent during the voting process.

The decision to vote individually was followed by a Point of Order raised by the Senate Minority Leader, Enyinnaya Abaribe – shortly after the lawmakers returned from an executive session, which was called after a rowdy session.

The floor had became rowdy after lawmakers disagreed on the amendment of Section 52(3) of the bill that deals with electronic transmission of results during elections.

It states “The Commission may transmit results of elections by electronic means where and when practicable.”

But the Senate Deputy Whip, Sabi Abdullahi, had moved that the section be amended to read:

“The commission may consider electronic transmission provided the national network coverage is adjudged to be adequate and secure by the Nigerian Communications Commission and approved by the National Assembly,” he proposed.

Loud arguments and chaos followed when lawmakers who disagreed with the provision began to complain loudly. The rowdiness lasted for over 15 minutes after which the Senate President, Ahmad Lawan, called for an executive session.

When the lawmakers returned, Mr Abaribe called for a division citing Order 73 of the Senate Standing Rule.

This rule allows for individual voting on an issue if senators disagree with the ruling of the Senate President.

Lawmakers were, thereafter, called upon one after the order and asked to vote verbally, Premium Times reported.

Consideration of the bill is still underway.

The issue of electronic voting has been a major recommendation from Nigerians and the lawmakers at some point attempted to omit that section from the legislation.