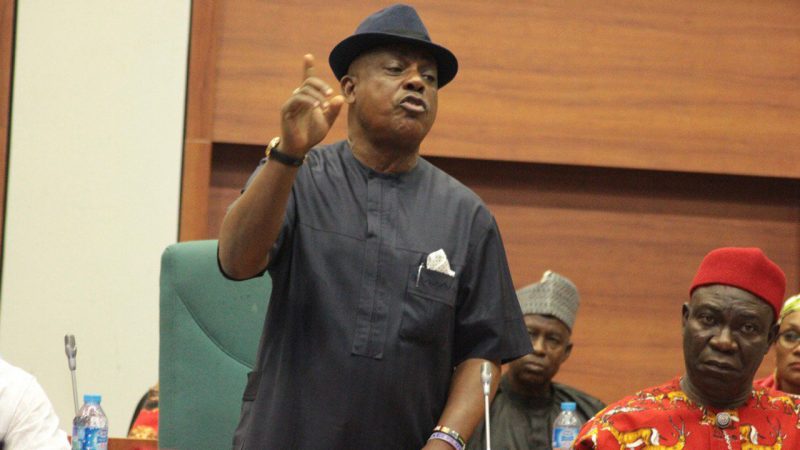 The National Chairman of the Peoples Democratic Party, Prince Uche Secondus has accused the Kaduna State governor, Nasir El-Rufai of talking like a terrorist because of his recent remarks about foreign interference in the forthcoming elections.

In an interview aired last week Tuesday, El-Rufai had threatened that if there was foreign influence in the 2019 elections, such foreigners would leave the country in “body bags”.

Secondus called on the Buhari-led administration to sanction the Kaduna state governor for his utterances.

He made this known earlier today, at the campaign rally of the PDP’s presidential flag bearer Alhaji Atiku Abubakar at the Tafawa Balewa Square in Lagos.

Sceondus began his speech by berating President Muhammadu Buhari for the worsening security situation in the country as a result of hunger in the land.

He said, “Since Buhari became president in 2015, many industries in Lagos have been shutdown. Our people have become hungry. Everywhere there is killing and hunger. Poverty and inhumanity has taken over. Human lives no longer mean much under Buhari.”

He therefore called on Nigerians to vote Atiku, saying “It is time for true change. Let us vote for a man who has been tried in public and private sector. Atiku means business. He will create more jobs. Our financial situation will be better. Lagos will regain its freedom.

“We ask Buhari to probe El-Rufai for that statement. We call on the government to do something about El-rufai’s death threat to foreigners. Is he a terrorist? He talks like a terrorist.”

Before ending his speech he made it clear that the PDP would not tolerate any form of rigging. He advised the Independent National Electoral Commission, INEC not to allow what happened in the Osun State governorship election repeat itself. Concluding he said, “One more thing, INEC cannot rig this election. The election in Osun was rigged but this one would be different.”

The presidential election is barely four days from now. Nigerians are waiting with bated breath.