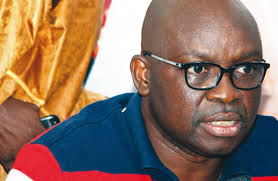 A state of emergency appears imminent in Ekiti State, as the rival APC and PDP remain locked in a power tussle to assert their authority in the state .

A police source disclosed that the government is anticipating that Fayose’s decision to fight his impeachment will provoke the breakdown of law and order in the state.

It would be recalled  that violent protests have continued to trail the move by 19 All Progressives Congress (APC) lawmakers in the state to impeach Governor Ayodele Fayose.

The embattled Speaker, Dr Adewale Omirin, forwarded a notice of gross misconduct to the governor, which sources within the APC said was served on him during the week.

A copy of the notice was also sent to his deputy, Dr. Olusola Eleka.

But Fayose advised the APC lawmakers to stop acting like “jesters”, describing the purported impeachment notice as the “joke of the century.”

According to him, the script being acted by the APC is a failed one because no one, no matter how highly placed, will be allowed to test the will of the Ekiti people.

Attempts by the 19 APC lawmakers to deliberate on Fayose’s impeachment and the governor’s refusal to go down without a fight has, however, thrown the state into crisis.

On Monday, Fayose’s supporters, including the state Deputy Governor, blocked all entry into the state House of Assembly in Ado-Ekiti, preventing the lawmakers from gaining access to it.

On Tuesday, a middle-aged man, identified as Modupe Olaiya, was killed in Efon Alaaye Ekiti, headquarters of Efon Local Government Area of the state, as members of the Peoples Democratic Party (PDP) staged violent protests against the plot by 19 APC lawmakers to impeach Governor Ayodele Fayose.

A source close to the town confirmed to journalists in Ado Ekiti that the incident occurred when the APC lawmakers who were said to be coming from Osun State rammed into the barricade mounted by the protesters at Ita Ore, a border town between Ekiti and Osun States.

The police were said to have fired several gunshots to scare the protesters, who had already taken over the Ado-Ita-Ore-Ilesa road with the victim reportedly sustaining gunshot injuries in the process.

Efforts made by the APC lawmakers to gain entry into Ado-Ekiti, the state capital to hold a sitting was however, not successful, as soldiers stationed at Ita Ore were said to have stopped them from entering the state.

Hallmark reliably gathered that while the Independent National Electoral Commission (INEC) is contemplating rescheduling the State Assembly election, the Federal Government on the other hand is considering a state of emergency in the state in the event that violence escalates.

A source in INEC disclosed that top officials of the commission have been holding several meetings on whether to postpone the state assembly elections after some influential politicians mounted pressure on it to reschedule it for another date due to security concerns.

“INEC is monitoring the situation in Ekiti. However, election will be postponed in areas where there are crisis and no security guarantee for our staff.

“Of course, where it is not possible to guarantee peace before Saturday, the chairman has already said that elections in such areas will have to be conducted at a later date,” the INEC source disclosed.

Reacting, Minister of State for Works Prince Dayo Adeyeye, told Hallmark that influential leaders in Ekiti and stakeholders are meeting to resolve the crisis so that it would not degenerate to an unbearable situation.

In his own reaction, the Special Assistant on Media to Governor Fayose, Lere Olayinka, told Hallmark on phone that it is the APC that was clamouring for the postponement of the election and doing all sort of things to prevent the election from being held.

He said that they were aware of the ploy of the APC to incite the people against the government so that there will be bloodshed to warrant state of emergency but that they are not going to succeed in their game plan for the cancellation and the state of emergency.

He said that as far as they were concerned the election would take place on Saturday.

He said that INEC had given that assurance that it would conduct the election because all the sensitive materials have been deposited at the Central Bank and it was witnessed by the PDP chairman and leaders of other political parties except the APC that is not ready for the election.

Calls made through to the INEC spokesperson, Mr. Kayode Idowu, were not picked. A text message sent to him was not replied at the time of going to press.

Meanwhile, the Catholic Ecclesiastical Province of Ibadan, Oyo State, has called on the leadership of the Peoples Democratic Party (PDP) to caution Governor Fayose, in order to end the growing confusion in the state.

This call was made by the church at a press conference addressed by the Archbishop of Ibadan, Most Rev Gabriel Abegunrin, at the University of Ibadan, on Wednesday.

Abegunrin commended INEC for organizing a generally acclaimed violence-free election on March 28, adding that the violence in Ekiti State was uncalled for and the governor should be cautioned against heating the polity.”

“The elders in Ekiti and the Peoples Democratic Party should be able to caution Governor Fayose and tell him exactly what it means to rule. Ekiti is getting volatile presently. The situation is peculiar and disappointing. Any governor would look for the people’s peace and attract their interests. Even if hoodlums are trying to play games, the governor is the number one security agent in the state.

“It is up to the governor to ensure that there is peace in Ekiti. This is not the Nigeria of 1960, this is 2015. The person the governor funded for election is leaving peacefully, and why should there be violence?”