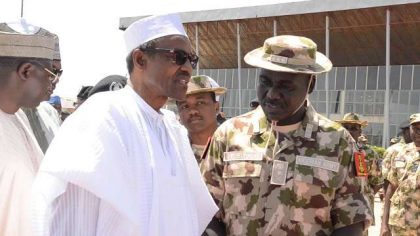 The 2019 elections offered much to be apprehensive about as regards the nature, character and the content of Nigeria’s democracy. There was no other time since the advent of  democracy in 1999, when our fledging civil rule was subjected to so much stress, pressure and assault as in the last general elections.

It is an irony, a tragic one to boot, that an   administration that benefited, and derived its legitimacy from free and fair polls could resort to the use of the military to enforce its will and attempt to subvert the democratic choices of the people using the military especially in areas where it is not popular, as witnessed in Rivers State .

The increasing militarisation of polity and political space call for caution. Before the elections, the military had maintained intimidating presence in about  30 or more states.  The show of strength under whatever guise ,and the manifest partisan role the military played in the political theatre are signs that our democracy is under self-induced stress.

The British government, US and other international agencies and governments have expressed worries over increasing militarisation of the electoral process. Democracy has no other name, the current administration is a beneficiary, if the immediate past administration had gone to   the dogs and manipulated people’s choices using the military, probably, we may not be talking about APC- led government today.

We need to remind the Buhari administration that we are not operating a diarchy, thus, it is becoming too difficult to rationalise the burgeoning role of the military as an interested, partisan party in political contestation.

The APC administration as a matter of patriotism must do a thorough soul- searching given the extent of betrayal of the citizenry who had invested in them and bought into its so- called reformist agenda,only to realise it was a great deception.

It is the view of this newspaper that efforts must be made by all, including this administration, to protect our democracy given a lot of bloodletting that secured it from the vice grips of the military. Many Nigerians were killed in the tortuous struggle to civil rule.

We can not afford the cost of political military, because at the end of the day, the people lose, and the country is forced to toe the path of self immolation.

In Rwanda and Uganda, we witnessed the effect of fusion of military and politics, and its corrosive effect.   When Museveni came to power with his rebel armies in the 80s, the Ugandan army had been thoroughly messed up by its partisanship that he had to disband the national army and built a new one with his rebel troops forming a nucleus of the new arrangement. Same happened in Paul Kagame’s Rwanda.

The ongoing blitzkrieg on Southern Kaduna nation by the military supposedly to curtail the crisis looks very much like ethnic cleansing, started by an irresponsible government backing on the support of a central government that has lost its moral compass.

When General Danjuma was Defence Minister under President Olusegun Obasanjo, the military were not given much political exposure as we are witnessing. Granted that the Obasanjo administration then had its own excesses such as Zaki Ibiam and Odi massacre,  the military did not play visible role during the elections.

Recent political histories in Africa are enough caution against overt deployment of military in political contestation. In Egypt,  the unmanageable political crisis as a result of President Morsi’s mishandling of political crisis led to the military intervention that brought Al sis to power.  The Algerian crisis needs to be properly managed as already there are alleged rumblings in the military.

Military has overplayed its hands illegally. The military  has no role in the election except as directed by chairman of INEC. Yet, it became the main actor in the Rivers State election.

The military have shown that they  are partisan. They are fast becoming  army of occupation. Buhari erred in allowing them to be used.This newspaper is asking for a judicial inquiry into Rivers.

There is a need for President to step back , and it is high time we reviewed  the leaderships of the various armies forces. The British and other international community said the behavior of the  military is embarrassing during the elections, that view is in sync with local observers.

The electoral umpire, INEC has not really lived up to the expectations of the people. The body plays a critical role in the success and growth of this democracy. It must not be seen to be partisan, and must stand for truth at all time. No matter the pressure from powerful interest it must be seen to be on the side of democracy and choices of the electorates.

Whether INEC under Professor Mahmud Yakubu has stood for truth is a matter for debate, but the public opinion and the views of international community seem to say the commission has not been above board.

We call on Yakubu-  led electoral umpire to use the supplementary elections to prove to Nigerians that its loyalty is to democracy and choices the electorates make.