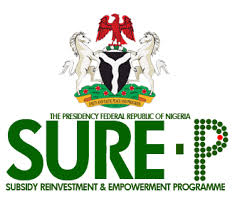 Recruited officers of the Subsidy Reinvestment and Empowerment Programme (SURE-P) and Federal Task Force (FERMA) have accused the Lagos State coordinator of the programme of owing them three years salaries running into millions of naira.

The officers during a protest yesterday at the office of the National Human Rights Commission, Oshodi, Lagos, equally protested against the fraudulent extortion of money from them by some executives of the programme.

The protesters accused their National officers and chieftains of the Peoples Democratic Party (PDP), in Lagos as being responsible for subjecting them to such dehumanising condition and extorting money from them, adding that the management was using the SURE-P/FERMA job to exploit desperate job seekers for their selfish political gains.

The protesters carrying placards with offensive inscriptions on it, sang and chanted solidarity songs alleging that they were mandated to pay outrageous sums before they were employed for the job, adding that three years after employment and resumption of duties they are yet to be paid a dime.

They said that at the commencement of the programme in 2013, applicants were made to pay the sum of N32, 500 each for uniform while additional N5,000 was paid for the procurement of the SURE-P forms.

They alleged further that the forms were picked at the residence of PDP Chieftain, Chief Bode George, with a promise that they would be trained in recognised institutions in the country.

They lamented that to date, no form of training had been organised for them. Instead, they were used for political rallies whenever any prominent government official was in the state in the build up to the last general elections.

The angry protesters said the whole recruitment exercise was a fraud, adding that they were just exploited by some people in the name of Federal Government project.

They vowed to continue their protest till the Presidency pays them the arrears of their salaries for three years.

Some of the women among the protesters who spoke with our correspondent in tears also recounted their tales of woe in the hands of the coordinators of the programme.

The pains they went through knows no bound in the course of their respective trainings as they took turns to tell their stories.

Some alleged that they lost their pregnancies while undergoing rigorous training exercises in the course of the programme while some said they lost their loved ones including husbands and children.