Thousands of supporters of outgoing US President, Donald Trump have invaded the Capitol Hill, the seat of the country’s government where a joint session of the Senate and House of Representatives are meeting to certify the election of Joe Biden.

Trump who has continued to allege without evidence that the presidential election which produced Biden was rigged against him, had encouraged his supporters to march to the capital to stage protests. 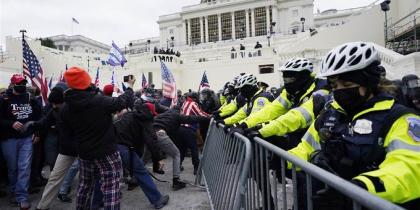 US vice president, Mike Pence who had rejected Trump’s call for to stop the certification, leading to attacks on him by the president, was escorted out as the protesters broke into the Capitol Hill.

Meanwhile, the Senate has entered into a recess, putting on hold the certification process.

Latest report suggest there is now an armed stand off between Trump supporters and security personnel, with guns drawn.