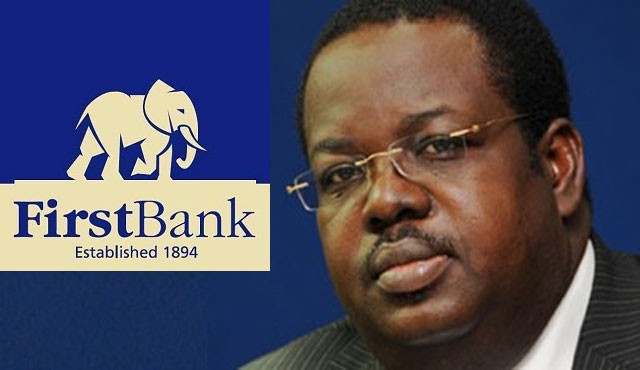 With a cumulative five-year profit growth of 559 percent and a similar surge in its assets base by an equally remarkable 116 percent within the same period, the jury is out that the soon-to-disengage Chief Executive Officer of First Bank Nigeria (FBN), Mr. Bisi Onasanya would be leaving with his head held high.

Analysts say the man who enacted various measures to reposition the bank has indeed left indelible marks not only in the institution, but the entire financial system.

At the exit of its former CEO and now Emir of Kano, Sanusi Lamido Sanusi, the Board of Directors of Nigeria’s oldest bank had a tough call to make, and they made it. After a series of meetings, bickering and horse trading, Mr. Olabisi Onasanya, emerged the top candidate.

One significant thing that made his appointment irresistible to the board was his effective and efficient management of one of its subsidiaries, First Pension Custodian Nigeria Limited as Managing Director/CEO.

This was six years ago, in 2009. Ever since, the bank has not looked back. Stakeholders of the bank are presently delighted that the board settled for Onasanya to manage the affairs of the century-old institution.

This is because he has not only given the bank a fresh ease of life, there has also been a calculated attempt to place the bank in a superior competitive position.

Despite a harsh operating environment, Onasanya has been able to take the bank to unanticipated heights and establish it as a market leader.

Not many have forgotten the lacklustre performance of First Bank a few years ago where unending queues were a common feature in its banking halls.

While that is now history, Onasanya started the bank’s repositioning by rocking the boat by clearing out deadwoods and retraining those that could be changed, in addition to the recruitment of fresh hands with new perspectives on the banks goals, processes and procedures.

Onasanya has been able to stabilise and upgrade the service delivery quality of the bank since his appointment in 2009, thus reinforcing confidence in the bank by its diverse stakeholders.

Insider sources at the bank, informed Hallmark that on assumption of office, the GMD confided in them that the bank needed a radical change to be able to compete and he focused first on working on the psychology of the staff by adopting a, ‘ yes we can’ attitude and setting goals and targets for them.

Looking back, the team has in the last six years grown the group’s Total Assets from a relatively paltry figure of N2.009billion in 2009, to N4.342trillion in 2014.

Other performance indicators of the bank show that its Non- Performing Loans (NPL) rests at a comfortable 3.9%, loans- to- deposits ratio at 67.7%, compound annual rate of growth (CAR) at 19.1% and return on average earning assets (ROAE) at 17.0% have been fairly impressive.

In the year preceding his coming exit, FBN Holdings’ audited results for the full year ended December 2014, showed that its pretax profit grew by 1.7 percent to N92.9 billion from N70.6 billion the previous year.

Although the bank has revised its branch expansion plans, it increased its branches from 510 in 2009 to 892 business locations.

The internal logic of the business has compelled FBN to close some of these branches to reduce cost of operations.

”In spite of the highlighted challenges, FBN Holdings Plc delivered solid financial results in 2014, across a number of key financial metrics including gross earnings and profit before taxes.

This strong performance is championed by our Commercial Banking franchise, First Bank of Nigeria Limited, and buoyed by our Investment Banking and Asset Management business which is rapidly growing into a powerhouse in the investment banking space,” said Chairman of FBNH, Oba Otudeko. Analysts have noted from the Holding Company’s statement that the core activity of the group is the bank.

”The bank prepared me very well for that job unconsciously. I had the opportunity in my days as the deputy general manager and financial controller to also combine that with being the co-coordinator of the enterprise transformation project” notes Onasanya.

”That gave me the opportunity to access and understand very deeply the strengths, weaknesses and opportunities of the bank.

In addition, my foray into First Pension Custodian gave me the opportunity to use the services of the bank as a customer.

I was able to see the bank from the viewpoint of customers. After six months of being an executive director of banking, operations and services, I was appointed group managing director.

This was after Lamido Sanusi Lamido was appointed Governor of Central Bank. Though a challenging task, I am quite thankful to God for my achievements.” Onasanya observes.

A seasoned banker and a chartered accountant, Onasanya is a highly respected and personable executive who has established a reputation at First Bank for solid performance and sound judgment.

” He is widely reputed as the architect of the modern First Bank, associated with various innovative and creative achievements.

He was Project Coordinator of Century 2 the new frontier, First Bank’s far-reaching enterprise transformation project at the turn of the century, as well as Project Coordinator of the First Bank Corporate Transformation project which has seen the bank accentuating its foothold on modernisation. Onasanya also superintended the latest composite Corporate Identity/Brand Freshening of the Group, a bold step heralding the international expansion of the First Bank brand.”

Dr. Richard Mayungbe, a financial analyst, reckons that Onasanya has brought a lot of re-engineering and innovation to the bank as well as improved the human assets of institution.

Chairman Independent Shareholders Association of Nigeria,Sunny Nwosu concluded that Onasanya played huge role in creating the holding company structure which enhanced the value of its shares to stakeholders.

During his time Nwosu added Onasanya did not only grow the bank, but also supported many businesses with loans.

‘’Onasanya has done well and one needs time to really do justice to all his achievements in the bank and the banking industry” he also said.

President Association of Stockbrokers of Nigeria (ASHON) Emeka Madubuike told Hallmark in a telephone interview that looking at Onasanya’s performance from the capital market perspective is satisfying given that First Bank is a foundation stock. ”He has done well” said he

”He is also reputed as a people person having pioneered significant transformation in the development of staff at FirstBank.

His tenure saw the transformation of the bank’s training centre into First Academy, a best in class corporate university that recently clinched the 2015 Global Council of Corporate Universities Award for best impact by a corporate university on the implementation of business strategies. The bank has also received the highly coveted Best Place to Work award.

”An articulate and insightful thought leader in the financial services industry, Onasanya has made meaningful contributions as a member of the Bankers Committee and is the Chairman of the Sub Committee on Ethics and Professionalism. He has served as a member of the Chartered Institute of Bankers Sub-Committee on Fiscal and Monetary Policies and a member of the Presidential Committee on Reduction of Interest Rates. He has also delivered several papers and served on various conferences C-Suite panels across the globe.

He is Editor of the new book, “Perspectives on Banking in Nigeria”, featuring a collection of learned articles by banking and finance professionals including operators, regulators and academics.

Under Mr. Onasanya’s leadership FirstBank has been back- to- back winner of both national and international awards, having been named “The Best Bank Brand in Nigeria” four times in a row – 2011, 2012, 2013, and 2014 – by the globally renowned “The Banker Magazine” of the Financial Times Group. Several other awards have also been won by him.

Onasanya is retiring in December 2015. Yet he has said, ”Within the Commercial Banking group, we will continue to drive increased segment specialisation across the organisation in line with the demands of an increasingly discerning customer base, evolving competitive environment and international best practices. Over the medium term, we intend to raise our profile beyond its current borders, establishing presence in select sub-Saharan African countries that are of interest. This expansion is expected to result in a number of benefits, including greater earnings diversification and increased shareholder value through higher returns on equity”,

Having performed fairly well in other parameters has not rubbed off on the bank’s stock.

While the development has hardly impressed shareholders, the bank believes that its stock is undervalued.