“I will deliver to the Gambian people and if I have to rule this country for one billion years, I will, if Allah says so”, was one of the signature statements of Gambian President , YahyaJammeh, summing up his views on leadership. Many African leaders have been in power for too long and their reign had largely 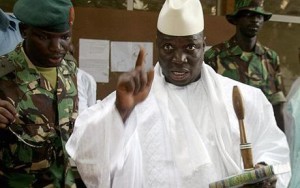 gone unchallenged until the Arab Springs and recent developments in Burkina Faso and Burundi, which have forced West African leaders to meet in Accra, Ghana to discuss the issue of Third Term.

They discussed the proposal to impose limits on presidential term at the regional summit.

Togo and The Gambia, whose presidents  have been in power for more than two terms, running into two decades for the later and since 2005 for the former opposed the idea. President YahyehJammeh, who graduated from Nigerian Defence Academy, NDA, in 1990, was a Second Lieutenant in ECOMOG during the Liberian civil war when he seized power in Gambia from long-time dictator and independence leader, Sir. DaudaJawara in 1994.FaurieEyadema, son of former Togolese dictator and West Africa’s first coupist, came to power 2005 upon the death of his father, GnnasingbeEyadema, ”the Lion of Lome”.

The third-term issue has caused a lot of controversy in several African states in recent years.

Burkina Faso’s President BlaiseCompaore was forced out of office last year after trying to change the constitution so he could run for a third term.

In East Africa, there have been weeks of protests and a failed coup after Burundi’s President Pierre Nkurunziza announced plans to seek a third term in office.

The Gambia, whose President YahyaJammeh has been in power for four terms, opposed the term-limit plan

The constitutions of most West African states already impose a two-term limit.

The proposal, which was  discussed at a recent  summit of the regional body ECOWAS in the Ghanaian capital, Accra, was supposed to formalise this across the region.

Protests in Burkina Faso blocked an attempt to change the constitution to allow for third terms being sought by another military strong man turned civilian leader BlaiseCompaore, in 1983 led eleven other military officers to seize power in the then Upper Volta. The victorious coupists asked the young officer Captain Thomas Sankara to be new leader, but his reign was caught short by Compaore in 1987 when he was murdered in a palace coup.

If a popular referendum on presidential term limits was held across the region, there is little doubt that people would vote in favour of it.

Since the president of Burkina Faso was overthrown last year for trying to change the constitution so he could seek re-election, this has become a big regional issue.

However, some West African leaders argue that each country has a different political context and there cannot be a blanket ruling. In a recent interview Professor BolarinwaAkintehinwa, Director -General, Nigerian Institute of International Affairs, NIIA, said one of the bane of African leadership is”the sit tight syndrome ”. With peerhaps a few exception, many African leaders prefer to die in office.

Kenneth Kaunda was defeated by the former labour leader, Frederick Chiluba in Zambia in 1991, and he graciously conceded defeat. In Senegal, Abdulaye Wade was also defeated and conceded defeat. Leaders like Joachim Chissano of Mozambique left power when the ovation was loudest, same went for Julius MwalimuNyerere of Tanzania.  Many of them prefer death and disgrace to honourable bow-out of office such as Bokassa of Central African Republic, Hastings Kamuzu Banda of Malawi, SassouNguema of Equatorial Guinea, Robert Mugabe of Zimbabwe, YoweriMuseveni of Uganda and a lot more other vile leaders who have raped democracy and pillaged their countries.

Optimistic souls would say that it is already a step forward that presidential terms are being discussed at an ECOWAS summit.

But imposing a two-term limit limit requires unanimity among West African leaders, and there is still a long way to go to achieve that.

The UN representative in West Africa Mohammed IbnChambas backed the plan and said it had been triggered by the failed attempt by President Compaore to change the constitution to allow him to run for a third term.

But reports indicated that the proposal was not adopted because of the reservation of Togo and The Gambia.

“This dissenting view became the majority view at the end of the day,” the Reuters news agency quotes Ghana’s Foreign Minister Hanna Tetteh as saying.

The plan has now been deferred for further consultation.

Togo’s President Faure Gnassingbe has been in power since 2005 and won a third term in office last month.

Gambian President YahyaJammeh is reaching the end of his fourth term in office after coming to power in a coup in 1994.

President Jammeh told the BBC in 2011 that presidents should be judged on what they do in power not by the length of time they have been in office.

“I will deliver to the Gambian people and if I have to rule this country for one billion years, I will, if Allah says so,” he said