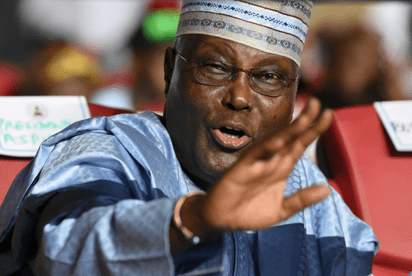 Nigerian politicians are immeasurably predictable. And the possible choice for the vice presidential candidate for Atiku Abubakar, the flag bearer of the PDP, manifestly shows this proclivity, essentially because of lack of strategic thinking among the political class. Now what is evidently and strategically obvious and simple is being complicated with this narrow campaign for Igbo vice presidency of the ticket.

What has distinctively distinguished this administration in spite of its many failings is the deep, strategic and foresighted nature of their approach to governance. Very frequently, they have defied orthodoxies and moved against public opinion in pursuit of their greater interest and objectives. And have in most cases triumphed.

Already the campaign has begun for an Igbo vice presidential candidate for Atiku on the basis of ethnic balancing and zoning formula characteristic of the old and traditional order. Likely names are being suggested to drum home the quality and capacity of the materials at its disposal. It all sounds practical and reasonable and politically correct; yet it is strategically absurd and self defeating.

Our recent history has shown that anybody aspiring to national leadership must rise above the obvious of self imposed limitation in the selection process, and challenge the orthodoxy. The 1993 presidential election won by late Chief M.K.O. Abiola established that fact, and Buhari’s emergence in 2015 reinforced it. Abiola won on a Moslem-Moslem ticket while Buhari was elected on a Yoruba- Hausa alliance, both first in our history.

There are several compelling reasons why the Igbo should forgo the vice presidential ticket. Agitators for an Igbo on the ticket hinge their argument on ethnic balance. But it only betrays their sense of deprivation which makes what is available the most desirable, inordinately driven by short-termism. Serious politics goes beyond the immediate to the strategic and long term.

First, merely being on the ticket does not guarantee the presidency; unless there is victory the ticket is irrelevant. And ethnic balance as being argued cannot win the election. President Buhari is not Jonathan; his position is far stronger and more formidable than his opponent in 2015; and unlike Jonathan he is disposed to deploy state apparatus to prevail.

So to remove him will require a powerful alliance of forces beyond ethnic balance. The Igbo on the ticket campaign is a deadly bobby trap for the PDP; to fail into it will make the ticket dead on arrival, with a very little fighting chance.

Second, the Yoruba are very politically sophisticated, shrewd and interest driven; they always believe and protect their own regardless of their differences. Jonathan’s problem began with the Yoruba when he did nothing to placate and compensate them after losing the Speakership to the Northwest by ACN treachery. Instead of punishing the ACN for the betrayal, it was Jonathan that carried the can.

The Yoruba will never vote PDP against their own Osinbajo, including PDP members, unless there is something for them. Their grievance against Buhari is not strong and deep enough make them reject their own; Buhari’s issue is collective and does not affect them alone.

To make such assumption is to display clear ignorance of the people and the history of Nigerian politics. Only the Igbo can be that politically naïve by voting for somebody out of sentiments as they did for Jonathan without extracting any commitment for their interest; see what they suffered for it.

Second, the Igbo need little incentive and motivation to vote PDP, because they have a grudge against Buhari. It is only by sharing the south west votes that the PDP will stand a chance of winning. Also the Igbo cannot provide the bloc votes required to win majority votes because of their small voting numbers, as well as their indifference to election and voting; so they need to complement their numbers with the south west votes.

Third, the Igbo are the whipping dog of Nigerian politics and IPOB has painted them with a tar brush. They are easily blackmailed and will be blackmailed as did Oba Akiolu of Lagos in 2015. Also such a ticket will be reduced to a campaign of Igbo vs. Yoruba and not Atiku against Buhari, which will completely obfuscate the issues for the election. And remember, the Igbo cannot win any political contest with the Yoruba because they lack a power base, while the Yoruba control the media.

Finally, by taking the VP, the Igbo will effectively foreclose their chances of producing the president in 2027, because it is unconceivable that after presumably eight years in office as vice they will again assume the presidency; it will not happen, not in Nigeria and those believing so deceive themselves. The slightest chance for the Igbo in 2027 presidency is to forego the VP.  It will make them statesmen, heal the wounds of suspicions with the Yoruba, strengthen their position, and make their argument unsalable.

For the sake of the Igbo presidency which APC cannot guarantee even in 2027 – power must first return to the southwest before going anyway – the ticket should go to the southwest because without a PDP victory, the possibility of Igbo presidency further remains a dream.  The time of the Igbo will come but now is not the time. It is the time of the Yoruba as in 2015 to deliver the ticket, not the Igbo.

Without sacrificing for the Yoruba it will be difficult to expect their support and sympathy when the time of the Igbo will come. For the Igbo to get the presidency they will need the Yoruba and most southern votes; and this will break the ethnic barrier that has existed between them since 1953.