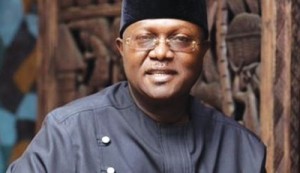 Prince Yemisi Shyllon, who is the founder of the Omoba Yemisi Adedoyin Shyllon Arts Foundation, OYASAF, has described works of art in the museum as a major driver of tourism in the country. Speaking in a chat with OREDOLA ADEOLA, after his foundation had donated a state-of the art museum to Pan African University (PAU), he urged philanthropists in the country to contribute more to efforts to promote Nigerian tourism industry.

Works of arts have been described as a source of tourism development in Nigeria, more importantly it is described as an important venture with ultimate goals of alleviating poverty and creating jobs. As pathways to further demonstrate his commitment to the needs of some of the museum of arts across the country.  Yemisi Shyllon, an art enthusiast, has collected over 6,000 pieces of African antiquities, traditional and neo-traditional pieces and contemporary Nigerian art in , which he started some years ago as an undergraduate, through his personal savings.

He has deepened his collection by being a shining light in the step toward filling the lacuna in the nation’s art space, which had in recent times being poorly funded by the relevant agencies of the government. His arts collection at Freedom parks, is described as a source of attraction to most tourists who visit the country.

According to him, “I have been promoting tourism in Nigeria, not just today. Go to Freedom Park, you will see some artworks that belong to me. A lot of people go to that place, drink, eat, take pictures and relax. That place is very conducive and also art environments just like my museum too. These places attract tourists into the country. It promotes tourism in the sense that it will attract those who love art; both domestic and international lovers of art.

Talking about his recent donation to the Pan African University, Shyllon described the institution as a corporate culture that support arts that he has been promoting tourism in Nigeria. For more than fifteen years, the institution has supported arts exhibitions through the promotion of Nigeria’s artists.

Apart from its own collections of art which were collected over the years, I discovered that through my interaction with the management of the school that the school has a dependable corporate governance principle in managing its affairs. This is one of the reasons why I believe that my legacy in the museum will continues in perpetuity. I have the confidence that some of my collections in the school will not filtered away, stolen or sold after many years.

So this is an institution that has a corporate governance principle. I have studied their operations and I have the confidence that the collections would transcend generations.

“ I choose a private university and not a public university because of their attitude to maintenance. PAU is mindful of arts collections, they have long time view about management as against some of the universities you find around. That is one of the reasons I went to that place; so I have no fear or iota of doubt in my mind that I have gone to the right place where those works would be maintained and would be properly taken care of  for the benefit of future generations of Nigerian  and the non Nigerians that would visit this country”.

Adedoyin who said he is not investing on the project for financial gains said “Legacy is more important. That is important to me and it is more important than every other thing. I want to leave the world fulfilled, that I have left this world more than I met it and I have also made my own contributions to the society. That is my ultimate goal and I am fulfilled”.

He also added that Pan Africa University, has a very strong and dependable corporate governance principle in managing their affairs, which would ensure the museum legacy in perpetuity for the next generation to see and benefit.

“I do not want to put my works in University or in a system or in an institution, and in some years later, these works would be filtered away and would be stolen or sold. So this is an institution that has a corporate governance principle and also opus dei of the organization Catholic Church and they are very selfless. I studied the system and I found them most appropriate to assure me of the continuity of my legacy in perpetuity.”

According to Adedoyin, Nigeria does not have edifices where people can see all the various spectrum of art and creativity. He said, Nigeria has antiquities and traditional arts, but there are no contemporary and modern arts being displaced so that tourists and visitors to share in the creativity and culture of the people.

He further explained that, he has been collecting arts for 40years  noting that what he was doing in art were properly positioned and proper furnished. “One of the ways which it  can properly  furnished if you are collector is to have your own museum or you contributing in an existing museum”.

“So in Nigeria I had to look around and study the environment and I found  out that Pan Atlantic University was a very good place for me to site the museum containing my works of art, so we  both entered in an agreement, we have started the production architectural brief and design and we are going to construct it”.

Recounting how art passion grew in him, Adedoyin said “To start with I can draw; I drew up to class three in the secondary school, even though I went for sciences I still had the latent ability but more importantly when I was in the university of Ibadan as an undergraduate I used to go to Yaba college of technology and they have a very good library. “During my holidays days in university of Ibadan I used go there to read in their library and behind their library was the student demonstration exhibition space and I used to leave  my studies in the library to go enjoy their work and that  was how it started”.

On Nigerian cultural heritage and artistic value, the art collector the philanthropist said that, there are more sculptors than painters in the country. He however noted that such drift is unfortunate because the country’s history as a society was made from sculpting. He cited examples with the Igboukwu culture, the Benin works of art, Ife art, Terakulture, Iludun of Abeokotua, the Ibasingi amongst others.

“Tracing our social-cultural transition after many years, you will discover that our great forebears are all sculptors; the likes of Oloworefise, Adigbolugi, Agbonbiofi, Arowo Ogun and others. It has become imperative for us as a society to resuscitate our interest in sculptural production. We also need to stop the drift in over producing painters at the expense of sculptors”, Adedoyin advised.

According to Shyllon, collection of works of art is not easy , it requires passion, interest and ability to differ your needs for satisfying one’s interest in art. He said, “It takes somebody who is committed just like the economists said that “wants are unlimited but means are very limited.  So my wants in life are so extensive that I have to prioritize. I rather spend my money on buying  art than frivolities, so it is a question of deciding base on the different levels of scale of importance”.