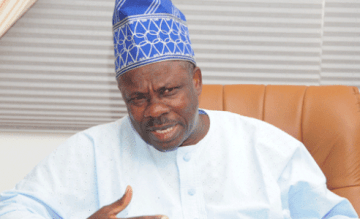 The Special Adviser to Governor Ibikunle Amosun on General Duties, Mr. Osinowo Ibrahim, says some leaders of the All Progressives Congress worked to ensure the victory of Buruji Kashamu of the Peoples Democratic Party in the Ogun-East senatorial election.

Ibrahim said in a statement on Tuesday, that it was the betrayal by the APC leaders that caused the party to have a poor outing in Ogun-East.

He said that it was unfortunate that despite the numerous projects inaugurated by Amosun in Ogun-East, people could betray the governor. He, therefore, vowed that those who betrayed the party would be punished.

He said, “Our poor performance in the last National Assembly, governorship and state assembly elections in Ogun-East shows that we didn’t appreciate the governor and his efforts. I call on all the party leaders that worked for the PDP, especially those that worked for Kashamu and Wale Alausa’s group to prepare to reap from their ungrateful attitude to Amosun and the APC.

“We have facts of some self-acclaimed APC leaders that collaborated with Kashamu/PDP to deny our party the victory at the senatorial polls, likewise the governorship and state assembly elections, despite the strong support the governor showed to our district.”

The statement read, “I am very sure they love Governor Amosun and his government, but some unfaithful elements that are working for the Social Democratic Party and the PDP have portrayed the people of the area as ungrateful elements and betrayed the governor by selling their votes.”