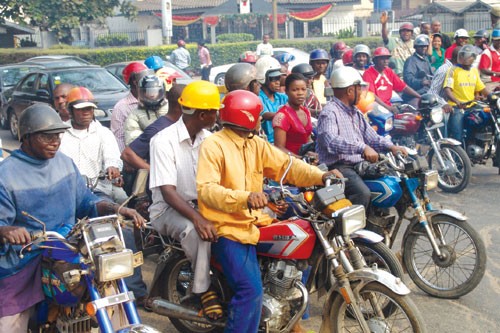 The Anambra State government has banned the operation of private and commercial motorcycles and tricycles from major highways in the state with effect from June 1.

This is contained in a statement signed by the Commissioner for Information, Culture and Tourism, Dr Uju Nwogu, in Awka on Wednesday.

“All motorcycle and tricycle operators in the state will from June 1, be barred from plying the Enugu-Onitsha highway, as well as Arthur Eze Avenue and Zik’s Avenue in Awka.

“Similarly, it will be illegal for all motorcycles, either private or commercial, to ply the Onitsha-Owerri expressway, Awka Road, Borromew-Upper Iweka-Bridge Head road, Old and New Market Roads and Oguta Road, all in Onitsha.

“In Nnewi, they are prohibited from the Nnewi-Nnobi road and Nnewi-Oba road. All commuters who must ply these restricted roads are by this announcement advised to use tricycles or the taxis and buses provided by the state government and other commercial vehicle owners,” the statement read.

While noting that the law enforcement agencies would ensure strict compliance to this directive, the statement warned that operators caught violating the directive would have their motorcycles or tricycles impounded.

It, however, said that a fine of N5,000 for motorcycles and N10,000 for tricycles, for first offenders, would be paid to retrieve such impounded motorcycles or tricycles.

It warned that subsequent arrest for a second violation of the directive would attract outright confiscation of the motorcycle or tricycle by the state government.

The statement further warned motorcycle operators in the state to desist from carrying more than one passenger on a trip.