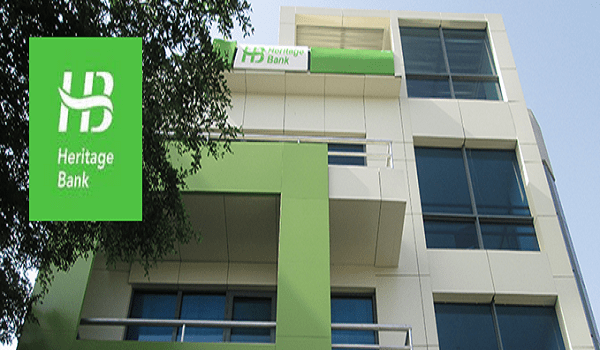 However, gaining entrance to the main hall where financial transactions take place, you will have to go through another door into the banking hall. From the security men to the customer care representatives, the customers are well received.

While this reporter was in the branch at Adeniyi Jones, Ikeja, it started raining. One of the bank’s security men was seen accompanying a customer into the banking hall with an umbrella over his head.

It is common to see customers with current account (mostly rich men) given preferential treatment. It was discovered that this customer was actually one month old at the bank and he operated a savings account. From his looks it could be said that he was in his mid-thirties and a mechanic as he was putting on what many would call a mechanic uniform.

The cultural aspect of the bank could be seen in the bank with seat cushions designed with Ankara and a small drum on it.

Heritage Bank is a financial services institution. It is one of the commercial banks licensed by the Central bank of Nigeria, the country’s banking regulator, with a National Operating License, that offers Retail Banking, Corporate Banking, Online/Internet Banking, Investment Banking and Asset Management Services.

The last Big Brother Naija (Double Wahala) which was held last year in South Africa was sponsored by this bank. BusinessHallmark gathered that sponsorship of big events or popular TV shows creates more awareness for banks.  Big brother Naija was the biggest entertainment show last year. Young Nigerians were glued to their Television sets and also social media for the duration of the show. Those who did not know of Heritage Bank before the show knew it after the show.

Speaking at the live streaming  of the opening session in January 2018, Mr. Fela Ibidapo, Group Head, Corporate Communications of Heritage Bank said, “When the last season (2017) of the reality show was about to start, some of us did not know what we were getting into. We are back here again because last year was successful.”

He said Heritage Bank believes in creativity and the Nigerian culture and expressed appreciation to MultiChoice for the opportunity to be part of the show.

In last year’s edition which was the season 20 house mates were invited to the house. The winner, Miracle Ikechukwu won the show. He was rewarded with N25 million and an SUV worth N20 million. The cheque was presented to him by Heritage Bank.

Speaking with BusinessHallmark, Mr. Duro Onifade who is a customer said, “There is hardly a long queue in any of the branches of Heritage Bank, so customers are hardly delayed. When there is a problem, they are quick to apologise for any inconveniency.

“The customer care representatives behave like air hostesses,” he continued. “They are very nice. I came here with a friend who banks with them and I was lured by the way they attended to him.”

Another customer who simply gave her name as Feyisayo said, “Well they could be very slow at times but they would apologise for the delay. This is something that you hardly get as an ordinary Nigerian in almost every company. Respect for customers irrespective of status is the main thing that attracted me to this bank.”

For Bello Mamuda, “Big brother Naija brought me to this bank. I live very close to this bank but I did not have much to do with them apart from making use of their ATM. As a fan of the show, I could not help but give it a try. And that was how I got hooked to the bank. The bank is classy and the bankers are well behaved.”

The Heritage Bank branch on Wemco Road, Ogba, Ikeja is similar to the one at Adeniyi Jones. The environment was serene with only a few customers in it. The security men were friendly with the customers all the way to the banking hall.

BusinessHallmark gathered that opening a savings account is N2, 000 while a current account is N5, 000. A company account costs N20, 000. Like other banks in Nigeria, Heritage bank is not without its problems but the remarks of customers show that the good side outweighs the negative side of the bank.

Efforts to reach Group Head, Corporate Communications of Heritage Bank, Mr. Fela Ibidapo to get his views proved abortive as he did not pick his calls neither did he reply his messages.